When it comes to the Paris Climate Change Agreement, the Dominican Republic is committing to a 27% greenhouse gas reduction, with 20% conditional and 7% unconditional, by 2030 compared to business as usual. They had joined the Paris Climate Change Agreement back on December 11, 2018. They approved a Nationally Determined Contribution Action Plan to advance their commitments under the Paris Agreement on climate change. The plan identifies the country’s priorities for the 2019-2021 period regarding legislation, finance and budgeting, monitoring and evaluation, and capacity building to strengthen climate action.

The Plan integrated adaptive watershed management through local systems of sustainable production. Initiatives to reduce climate vulnerability in agricultural, tourist and marine coastal areas.Incentives to increase energy efficiency and participation of non-conventional renewable energies and deployment of cleaner transportation alternatives. All are impressive steps that take action in combating climate change.The Plan was developed through a consultative process undertaken with support from the NDC Partnership, including an August 2018 national workshop, which brought together more than 100 representatives from 60 State and non-State institutions to discuss the Plan. The Plan will provide for planning, coordination, mobilization of resources and transparency in NDC implementation to advance realization of the Dominican Republic’s development and climate objectives. It will be reviewed annually to ensure priorities are updated and included in the country’s development plans.The NDC Partnership helps developing countries improve and apply their NDCs through technical assistance, with Partnership members providing support to: strengthen policy frameworks; integrate climate actions into national, sectoral and subnational plans; develop budget and investment plans; share knowledge and resources; and build stronger monitoring and information systems in line with country requests.

Santo Domingo, also known as the Dominican Republic, suffers from extreme weather events, employment and loss of livelihood and debt in large economies. These are among the top five risks facing the Dominican Republic, according to the World Economic Forum (WEF). Tied in fourth place are digital inequity and failure in cybersecurity measures, which complete the list of dangers facing the country for the next two years, according to the WEF Report on Global Risks 2022, presented this Thursday. The document points to the “failure of climate action” as the main long-term threat to the world and the risk with the potentially most severe impacts over the next decade. “Climate change is already manifesting itself rapidly in the form of droughts, fires, floods, scarce resources and loss of species, among other impacts. In 2020, multiple cities around the world experienced extreme temperatures that had not been seen in years, with a record high of 42.7 degrees Celsius in Madrid,” it adds. Climate change is still perceived as the most serious threat to humanity. Respondents rated “climate action failure” the risk with the potential to inflict the most damage on a global scale in the next decade.

I personally haven’t experienced any of the severe damages and tribulations that climate change has had on the Dominican Republic. I have seen videos of the intense storms or hurricanes that pass every year and the massive damage that it causes. Almost every Caribbean island is sadly at the mercy of these tropical storms. 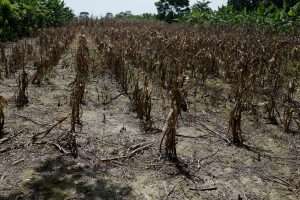 In Guatemala, agriculture is the main source of income and sustenance for farmers and city folk. When there are months of drought it causes crops to shrink or not grow at all. Unpredictable storms and hurricanes cause the crops to drown in water and mud from the