The dust has settled at COP27, the 27th United Nations Climate Conference at Sharm El-Sheikh in Egypt where a record 45,000 people registered to attend. The longest running summit of all the conferences, agreements made in the final moments has left us all with hope but also doubts. COP27 produced a mixed bag for the future.

Even before the conference started there was resounding outcry for loss and damage payments — monies to be paid to poor, less developed countries who have been victims of the changing climate, by countries who suffered floods, were imperiled by droughts and sea level risings that are fast erasing the shores of island nations. Among the worst hit is Pakistan where a third of the country was flooded from continuous rain in August, causing an estimated $30 billion in economic losses. Extreme storms caused irreparable damage in Madagascar and Mozambique while in India’s crops in the country’s bread basket were destroyed by heat waves.

A special fund was proposed and resisting to help those countries came from wealthier industrialized countries, such as the United States, China, the UK and the European Union, not surprisingly the largest emitters of greenhouse gases.

But persistence paid off. COP27 came up with an agreement to create a fund  dedicated solely to compensate climate victim countries for their losses and damages. The how’s and why’s are still unresolved: How much money will go into the fund?  How much will rich countries pay? Who is working on the details? What will the rules look like? Hopefully all will be worked out before next year’s COP28 in United Arab Emirates next year.

One whole year. Before a penny gets allocated by the new fund.

The slow, plodding pace of nearly 200 nations battling over climate issues in an effort to save the planet and beat out the climate crisis seems antithetical to the race against time to lower the global temperature before we reach the tipping point. Limiting global warming to 1.5 °C above pre-industrial levels means sustained reductions in greenhouse gas emissions by 2030, the date set in the 2015 Paris Agreement.

Currently the earth’s average temperature is  1.2 degrees Celsius warmer than it was before the late 1800s right before the industrial revolution according to the World Meteorological Organization.

“It’s clear that the window for 1.5 is closing fast,” says Chukwumerije Okerere, who studies climate governance at the Alex Ekwueme Federal University Ndufu-Alike Nigeria and who was at COP27.

It’s conceivable we will miss the 1.5 degrees Celsius warming target.

Reducing emissions of carbon dioxide and methane by replacing fossil fuels with clean energy is key to saving the planet. But language addressing reductions of global greenhouse gas emissions by half by 2030 was attacked and blocked in draft agreements at COP27 by nations who export oil and by oil-producing states. The mitigation work program established at last year’s COP26 in Glascow made clear, standardized targets to reduce emissions for all countries. At COP27 the program was heavily debated but thankfully a compromise to keep the program running was reached.

COP27 made progress by creating a loss and damage fund but for many the summit left much to be desired. It is, however, important to know that the yearly United Nations Climate Conferences are essential to advance the goals of the Paris Agreement and amplify the struggle of those countries under siege by climate change induced disasters. Most important, these summits keep us focused on how richer nations will help poor ones and the ongoing efforts for decarbonization. 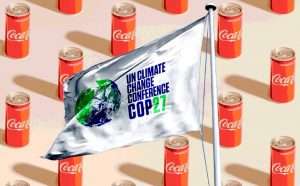