Within the past decade, people across the globe have felt and observed days of high temperatures, which are not only becoming more unbearable to stand in but are becoming more frequent enough that it is impacting winter seasons in terms of weather and climate. The bigger issue is that more frequent and worse heat waves are just one of the many signs of climate change slowly worsening over time that it greatly affects all living organisms in the face of the earth. Climate change is the concept of long-term shifts in  temperature and climate patterns that result in unusual weather. This is due to the increased human activity that has been in effect since the past century. The question to be asked is regarding the interaction between climate change and heat waves and explaining in detail the impact of heat waves on the planet. The increased human activity within the past century  worsened the climate change situation and  affected the everyday lives of living organisms. 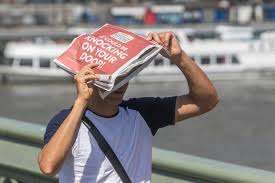 How heat waves change alongside climate change comes down to the increased effect of global warming-which is within the same vein of climate change but different from each other. Global warming is a term referred to as the increase of concentration of greenhouse gases within the Earth’s atmosphere, and it means the gases are trapped within the atmosphere and start warming up the Earth. The major culprit in the production of greenhouse gas emissions is the continuous burning of fossil fuels, especially in the United States (behind China), where industrial activities make the country one of the largest contributors to the global CO2 (Carbon Dioxide) emissions. This is all driven by the growing national economy and population that results in increased emissions of greenhouse gases. As Carbon Dioxide is a form of greenhouse gas, it is what causes global warming over time as more is emitted. This results in heat waves being more frequent during the summer seasons that can extend towards the fall/winter seasons. To summarize, heat waves change alongside climate change due to global warming, as more greenhouse gases are emitted to the planet, the worse heat waves will get in general.

Due to the increased greenhouse gas emission, the recent heat waves have made a large impact within the United States within the past century. The US Environmental Protection Agency had posted a chart regarding the trends of multiple heat wave events within the decades of 1961-2019. Each decade is marked by a steady increase in heat wave frequency, durations, seasons, and intensity. The key point listed in the article is that across major cities across the US, there has been a steady increase of an average of six heat waves per year during the 2010s, as compared to two per year in the 1960s. Secondly, those heat waves during the 2010s can last up to 4 days long in the major US cities, being a day longer than the average heat wave in the 1960s. Lastly, the average heat wave across 50 US cities was 2 degrees Fahrenheit during the 1960s, which has jumped up to 2.5 degrees Fahrenheit above the local 85th percentile threshold. To summarize, heat waves make an impact on everyday life by having more heat waves per year, longer lengths of heat waves that can last for days, number of days between heat waves, and most importantly, how hot the weather is during the heat waves.

As there isn’t a clear-cut solution to prevent or reduce the harmful effects of heat waves, there are ways how individuals can adapt to the rise and intensity of heat waves in modern times. The website ready.gov has set out plenty of ways to adapt to heat waves. People can identify facilities within their communities that provide air conditioning (such as libraries and shopping malls), cover up their house windows with drapes/shades, install air conditioners with insulations, weather-stripping doors/windows as preparations for the heat wave. During the heat waves, people can take showers/baths with cold water, wear lightweight/light-colored clothing, drink plenty of cool fluids, avoid high-energy activities during the day, and find plenty of shade outdoors. These are the precautions and steps that people can take to prepare for a heat wave or to stay safe during the heat wave.

In conclusion, as climate change and global warming worsen over time within the past decade due to the steady increase of the emissions of greenhouse gases such as CO2 (Carbon Dioxide), the trend of heat waves being frequent and unbearable will continue to rise. This harms all living organisms on the planet, such as the ice melting in Antarctica, to humans living in abnormal temperatures in the fall/winter season. As greenhouse gas emissions rise, the worse heat waves get in terms of having more heat waves than usual, even higher temperatures, and how long the heat waves last. However, there are multiple steps that people can take to prepare and to stay safe for when a heat wave happens, as it  often happens in modern times.