Many believe that solid-state batteries are the next generation of batteries, and they are doubling down with billions of dollars into research and manufacturing facilities.  Recently, Toyota announced $13.6 billion investment in battery technology, focusing mainly on solid-state. Countries are also interested. Japan, for example, is setting up a 19.2 billion dollar grant to aid the research for decarbonization technology, which includes battery research. Some of the other companies  interested are Ford, Samsung, BP, Hyundai, Mitsubishi, BMW, Renault, Nissan, Fisker, Panasonic, and the list goes on. Below I will discuss how the current lithium-ion batteries  compared to the solid-state batteries. 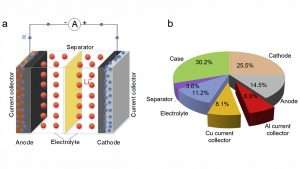 Lithium-ion batteries have two electrodes – anode (positive) and cathode (negative), a  semi-permeable separator in the center, and a liquid electrolyte. When a battery is charging, the electrons in the cathode flow through the external power source (battery charger) to the anode. At the same time, the lithium-ions in the cathode flow through the liquid electrolyte and the separator to the anode’s side. When a device is connected to the anode and cathode, the anode releases the electrons and the lithium-ions so that they can flow back. This causes the device to receive power. Once all the electrons and lithium-ions flow back, you will have a dead battery. You can keep this cycle going for many runs, but eventually, the battery will get weaker and hold less and less charge. Another issue lithium-ion batteries face is with the dendrite. Over time, deposits of the lithium-ion can build up in the anode, forming spikes that can puncture the separator. If the spikes manage to touch the cathode, you will have a swollen battery or. worse case, an explosion. 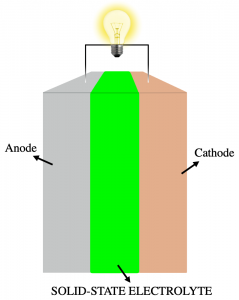 So, you might ask, why aren’t solid-state batteries more commonly used? It turns out that solid-state batteries are difficult to manufacture, and scientists are still testing out new materials, preferably those which are abundant and affordable. There is also a lack of facilities for mass production. Because of this, whatever is being produced is minimal and pricey. Companies are hoping that in the future, solid-state batteries could be a fitting rival to the well-used lithium-ion batteries though economics of scale.

Lithium-ion batteries were a  game-changer, and they pretty much made it possible for us to have portable electronic devices, electric cars, and battery storage centers. But they are  by no means perfect. We need a new battery that can counteract the flaws found in lithium-ion batteries, while still being affordable and accessible. Many  think solid-state batteries will be the answer.