OurTake: COP26 — the Most Important UN Climate Summit Since COP21

COP26 is the most important UN climate summit since COP21 in 2015 when the Paris Agreement was signed. At that meeting, representatives from 195 member nations (called Parties; COP stands for Conference of the Parties) made Unilaterally Determined Commitments (UDCs) to lower their carbon emissions, the invisible gases that trap heat and are causing the climate to change. The Parties agreed in Paris that they would reconvene in 5 years to make more ambitious UDCs. COP26 was scheduled for last year but was postponed due to the COVID-19 pandemic. It will now start on October 31, 2021 in Glasgow, Scotland, and run through November 13.

A number of factors have combined to raise the importance of COP26 to a level unseen since Yalta and Dunbarton Oaks set the political and economic parameters for the post-WWII world.

First is time. Glasgow comes six years after Paris, and in that time climate change has accelerated. Indeed, it has evolved from a cloud looming on the horizon into a full-blown actuality. Everybody has been affected in some way by the changing. Everybody knows, or ought to, that the climate crisis is real. Climate denial is no longer a serious position to espouse.

Second is the COVID-19 pandemic that engulfed the globe in early 2020. Covid quickly came to dominate  media headlines and, quite naturally, the majority of the world’s attention, relegating the climate to Its customary  obscurity despite it’s growing salience. The lockdowns demanded by the pandemic had an unexpected effect that temporarily thrust the climate back into the spotlight — clear blue skies broke out over city after city for the first time in years. Los Angeles, London, Delhi, Beijing and many other cities all experienced breathable air and unaccustomed visibility, revealing to millions the negative impacts of fossil fuels on their daily lives. When the lockdowns ended, the emissions and the pollution returned. The brief demonstration of the visible effects of burning fossil fuels promoted many proposals to rebuild economies greener, with low-carbon or no-carbon alternatives. Regrettably, few countries seized the opportunity the pandemic had offered them, opting instead to continue their reliance on coal, oil, and gas. Within months, carbon emissions exceeded pre-pandemic levels.

Third is the science. Since Paris, climate science has grown and matured as a discipline. Much research by scientists from multiple countries collected and analyzed terabytes of data on many aspects of Earth’s complex climate system. Questions were answered, uncertainties clarified, projections refined. A whole new branch of climate science, that of ascription, enabled scientists to specify the extent to which an extreme weather event was influenced or caused by climate change. Whereas at the time of the Paris summit, climate science was relatively little known or accorded much validity, by now climate science is generally recognized as legitimate and invaluable. 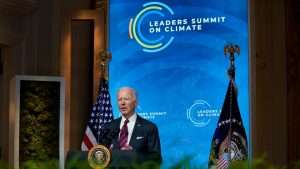 Fourth is the politics. Today’s world is not the same as it was in 2015. While the US played a lead role in forging the consensus that culminated in the Paris Agreement, President Trump thought climate change was a hoax, and promptly after his election denounced the accord and announced his intention to withdraw from it. During Trump’s presidency he championed the coal industry, killed Obama’s Clean Power Plan, and gutted or repealed close to 100 environmental regulations. President Biden values science, and understands that the climate crisis is an existential threat to the country and the world. One of his first acts as President was to rejoin the Paris Accord. He enjoined all departments of his government to assess and consider the climate impact of all they did, making the climate every department’s concern. Having campaigned on a robust climate plan and accepting most of the recommendations of a working group he established during the transition, Biden announced early in his presidency a much more ambitious 10-year, $4 trillion climate program to transition the country away from fossil fuels to clean energy sources, which he astutely characterized as a jobs program. While he could — and did – Biden implemented some parts of his program by executive order but other parts require passage by Congress.

That approval hasn’t been easy to get, consuming several months and forcing some parts of Biden’s agenda to be severely trimmed and others to be dropped entirely. The legislation is still pending, even though COP26 is about to begin. Biden has gone to Glasgow without the stature that an unequivocal US commitment would have endowed him with. He won’t be able to cajole or browbeat the other leaders in attendance, but perhaps he can use his considerable political skills to forge a world-pleasing compromise between those Parties amenable to or desperate for fast, deep emission cuts and those reluctant or resistant to increasing their emission-reduction commitments.

Fifth, COP26 is important because we’re out of time. Carbon emissions are cumulative. CO2 stays in the atmosphere for 300-900 years. Methane only stays 9 years, but it traps more than 80 times as much heat as CO2. Thus, even if we stopped emitting greenhouse gasses today, climate heating would continue for centuries. Climate scientists have calculated that in order to avoid heating the climate beyond 1.5°C — the point at which they now agree will have catastrophic consequences — the world must reach net-zero emissions by 2050. (Net-zero means that any carbon emissions are offset by an equivalent amount of carbon absorbing measures, such as tree planting.) To reach carbon neutrality by 2050, we must cut carbon emissions by 45-50% by 2030, just over 8 years from now. However, to reach that target, the commitments from the Parties at Glasgow must be considerably more ambitious than their Paris ones — which most Parties have failed to meet. Despite clear evidence that climate disasters are exacting ever higher tolls in even first-world countries and ever greater public pressure on corporations and governments to take swift, responsible action, many Parties have not formulated or submitted new commitments, a sign that too many still fail to grasp the imperative of COP26 to seize our last real hope of avoiding disruptions on a scale that could cause the collapse of our civilization and decimate the human race if not render it extinct.