They Did It! Historic Paris Agreement Reached on Climate Change, December 12, 2015

After two weeks of contentious debate, delegates from almost 200 countries agreed to make climate change a priority in their countries. On December 12, 2015, several thunderous minutes of applause and cheers followed the historic vote on the agreement. From this point on in time, climate change will be given priority by countries all over the world. Everyone who agreed to the treaty has pledged to put into motion actions that will ultimately reduce greenhouse gases. The goal is to keep global temperatures from rising more than 2°C (3.6°F) by 2100, from pre-industrial times.

Representatives from 196 countries with authority delegated by their respective governments adopted an international treaty called The Paris Agreement on 12 December 2015 at COP 21 in Paris. The stated goal of the treaty is hold global temperature rise to well below 2oC, preferably 1.5oC, compared to pre-industrial levels. It is a legally binding international treaty on climate change. The global target itself is not legally binding, but there is an obligation of nations to regularly set national targets for their contributions to the global goal. The Paris Agreement came into force on 4 November 2016 after 55 countries representing 55% of global emissions officially joined the treaty; 191 countries have now joined. The Paris Agreement is a landmark achievement because, for the first time, a binding agreement brought all nations into a common cause to slow climate change and adapt to its effects.

To achieve this long-term temperature goal, countries aim to curtail greenhouse gas emissions enoughto achieve a climate-neutral world by mid-century. However, the countries’ commitments known as Nationally Determined Contributions (NDCs) so far are not enough to achieve the goal of keeping the global temperature rise ‘well below 2oC.’ Given current commitments, scientists predict that the Earth’s temperature will increase by 3-4oC by the end of century compared to pre-industrial levels. To address this challenge, the Paris Agreement sets up a ‘Global Stocktake’ process by which the national commitments are reviewed every five years to see how the world is progressing on climate change mitigation, resilience and finance and to provide the opportunity for all countries to increase their ambition to limit global warming.

Slowing greenhouse gas emissions globally will cost an estimated $3 trillion to $7 trillion yearly. This figure includes funds that will pay for adapting to climate-change impacts, such as building and reenforcing sea walls, and mitigating its causes by developing renewable energy sources such as wind and solar. The 31-page Agreement stipulates that developed countries send $100 billion yearly to developing counterparts. Since that time, pledges have been significant, but fall far below that level. At the first pledging conference in 2014, developed countries committed $9.3 billion to the Green Climate Fund (GCF). At the second, in October 2019, commitments totaled $9.8 billion, despite no payment from the U.S. To that point, the GCF had allocated $5.2 billion to 111 projects in 99 countries.

Accountability was an issue that was fiercely debated in Paris and in all COP meetings. The pact has reporting requirements, but no real means to hold nations to their pledges and commitments. Without an enforcement mechanism, the Paris Agreement depends on nations to care about their standing among the collective of their peers. Some care more than others. Most have made good faith efforts to curtail emissions, but the pace of change has been far too slow to reach the Treaty’s target by mid-century.

While the majority of countries were pleased with the new climate deal, and environmentalists too welcomed the long-term emissions reduction goal, progress toward reaching that goal continues to be disappointing.  Developing countries want to see monetary compensation for loss and damage incurred by climate change, since developed countries are primarily responsible for the greenhouse gas emissions spewed into the atmosphere.

We will see what the 26th Conference of the Parties (COP26) to be held in Glascow, Scotland at the end of 2021 brings in regard to raising climate ambition both in regard to reducing greenhouse gas emissions and to enhancing equity in regard to climate change impacts.

The considerable effort in Paris to carefully craft the agreement to avoid needing approval from U.S. Congress went for naught when President Trump initiated the year-long process required to withdraw from the treaty. The U.S. had played a lead role in the negotiations leading up to the Paris Agreement; its absence after President Trump’s decision to disavow and disparage it had major but impossible to quantify impacts on the other signatories. Their attitude was: “If the U.S. isn’t going to commit to making difficult changes, why should we?” Hesitant nations lost the cover that a committed U.S. would have provided, and they lost the nudges, persuasions, sweeteners, and outright largesse that the rich and powerful U.S. could and would have provided. And will likely begin to be operative once again now that the U.S. has rejoined under President Biden. 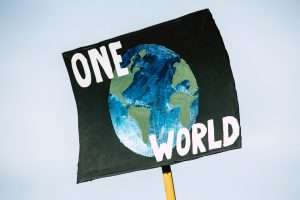 ClimateYou.org Senior Editor George Ropes discussed his own evolution in learning about and formulating views on climate change, his thoughts on COP26 in Glasgow happening now, and global warming going forward. Abby Luby, ClimateYou Editor was the interviewer. This interview has been edited for publication purposes. AL:      When 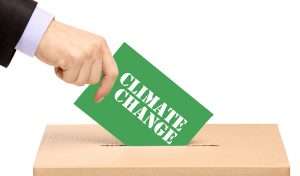 My Take: Vote at the Ballot by City Tech Blogger Brian Gomes

We are seeing the dangerous effects of climate change more than ever before. In 2020 California had 9,917 incidents of wildfires that burned though 4,257,863 acres of land. It was one of the worst recorded years for the state, but it’s not the only place that has been

Our Take: An Empty-handed Biden Will Bereave us all

A piece in The Guardian titled “Is Joe Biden about to show up at COP26 empty-handed?”, by climate activist and author Kate Aronoff, argues persuasively that President Joe Biden has the executive powers necessary to set the US on a course to replace climate-heating fossil fuels with ones that