Rebuilding the Grid to Adopt Solar and Wind

On August 7, the Climate Institute hosted their weekly discussion featuring Charles Bayless, Co-chairman of the Climate Institute’s Board of Directors. Bayless also chaired the Steering Committee for the Institute’s landmark the North American Super Grid. The growing use of renewable energy such as solar, wind and hydropower requires a new need for a new electrical grid that can fully incorporate clean energy resources. The demand for and reliability of electricity to all parts of the country means building new and more efficient power plants, transmission wires, transformers and poles, among other updated components.

According to GreenTechMedia, the cost of shifting the U.S. power grid to 100 percent renewable energy over the next 10 years is an estimated $4.5 trillion. Bayless said fully enmeshing renewables like wind and solar into the existing grid will have its challenges because of the skepticism and reluctance of the utilities. “The utilities are cautious and they believe in profits, so they are holding back, waiting to see where this is going, who the winner is. Many utilities are convinced things are changing fast but they are not going to jump right in. Some are putting in solar designed to last 15 years not 40. It’s going to be slow, too slow.”

The new Wood Mackenzie report says that to replace nuclear and fossil fuel generation would cost $1.5 trillion. Add on the estimated 900 gigawatts needed for storage and the cost rises to $4 trillion. Although Bayless did say that newer batteries that could charge and discharge faster are coming down in price significantly which will up the capacity and lower prices. 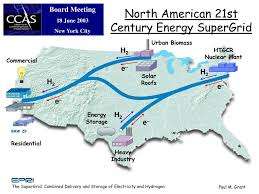 “The grid will have to change,” Bayless said of the current 200,000 miles of high-voltage transmission (HVT) lines that would have to double if renewables are to be used as part of an efficient decarbonization goal. “We will have to get Congress on board. The best way to get utilities on board is to have a national plan that outlines where we are headed in the next 15 years.”

The Climate Institute launched North American Supergrid initiative in 2017 which proposed a 52-node, high voltage direct current (HVDC), largely underground transmission network that would extend across the lower 48 states. The super grid would utilize clean renewable energy across the country, ie: wind energy from the Great Plains and Midwest, solar energy in the Southwest, geothermal energy in the Rocky Mountains and Great Basin, and hydropower in the Northwest and Southeast — renewables that would compete with fossil fuel generated energy in an open, national electricity market and one that would have ample backup power during outages.

Bayless said the cheapest and easiest way to lay the underground cables would be alongside the nation’s roadways likely will face opposition from environmentalists. Ultimately the project would need regulatory approval to move forward. “The North American Super Grid may have to happen in pieces. The Super Grid is visionary just like the Interstate Highway system was. If we can draw on some of the vision of the highway system, it can make a profound difference.”

But some footsteps have been taken at least. On Friday, August 7, 2020, The Federal Energy Regulatory Commission (FERC) sent a report to Congress outlining opportunities and barriers around transmission development. The report stressed that high voltage transmission would improve reliability, yet noted that the need to navigate the regulatory processes across the federal, state and local levels was a formidable barrier to implementation.