The Power of Light: Analysis of Solar Power Technology

New York City’s Use of Electricity as Solar Power

Today, the population of New York City stands at 8.4 million residents. It’s difficult to speculate the requirements for the city to match its population’s needs. Data compilation under the Sustainable Engineering Lab for Columbia University depicts lower annual electricity use between 100 to 5,000 kilowatts (kW) per hour at residential areas in Queens and Brooklyn. Higher annual electricity uses centers in Manhattan, averaging approximately 10,000 to 50,000 kW per hour (Sherpa, “Estimated Total Annual Building Energy Consumption at the Block and Lot Level for NYC”). The national average annually for residential electricity use stands at 10,909 kW per hour. Granted, annual average for resident’s electricity use within Queens and Brooklyn appears low at 1,000 kW per hour and spiking highest in commercialized areas, but the summation of all areas under Queens and Brooklyn spells the substantial energy requirement for New York City—without its most active borough, Manhattan.

Interestingly enough, Manhattan’s electricity use aligns with the national average for electricity use, where the objective behind electricity sheds confusion from varying objectivity in conjunction with varying zonings—residential, commercial, and mixed-use. Regardless, New York City appears completely capable of meeting extensive electricity requirements, likely prioritizing cost-effective electricity production in the cities’ best interest. Under these observations, it’s important to investigate renewable energy sources like solar power for its potential to supply cheap and efficient power. 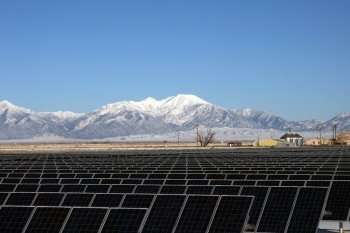 Notable promotion for renewable energy was apparent up to one decade ago. At this point, renewable energy as a supplier to United States’ electricity remains foreign, only consisting up to 5% in renewable energy supply. Later, data reports “global solar capacity grew 28.7% over the previous year…” by 2014. Theoretically, growth projections—if consistent aligning to recent growth in global solar power—indicates solar power can become the leading contributor to electricity by 2024 (Heinberg and Fridley, 47). The report links increased projections in solar power to decreasing cost for solar power: “the price of photovoltaic (PV) cells has fallen by 99% over the past twenty-five years, and the continues…Deutsche Bank solar industry analyst Vishal Shah forecast that solar will reach ‘grid parity’ in 36 of 50 U.S. states by 2016, and in most of the world by 2017” (Heinberg and Fridley, 49).

In fact, the president of Tesla, Elon Musk, announces his introduction of solar panel technology as mitigation efforts to supersede the need for fossil fuels: Solar Roof, which is a retrofitted roof with solar panels that he deems as “the integrated future…. [This] can solve the whole energy equation” (Austin, “Tesla Raises the Roof”). The creativity behind such a concept focuses on accessibility of solar panel technology to supply electricity for all households. It appears practical to mass-transition the source of electricity to solar power for most households. Obviously, economic and structural restrictions for solar panels apply to some households.

Similar integration of solar panels extends to New York. To be specific, Governor Andrew Cuomo uses tax breaks and compensation for homeowners and landlords to push the installation of solar panels, with statewide solar capacity goal of 6 gigawatts for 2023 (McGeehan, “How New York City is turning its thousands of roofs into Power Providers”). In perspective, one gigawatt should approximately power 700,000 homes, still requiring approximately 3,000,000 solar panels according to the Department of Energy Efficiency and Renewable Energy for the United States. Hence, distribution of 6 gigawatts of solar power across New York will power approximately 42,000,000 households, prompting substantial energy equivalence while incentivizing an environmentally sustainable model for energy production.

It becomes essential to consider the quality of our electricity becoming important to consider cheaper alternatives as electricity requirements for the public increases. Optimistically, the future will implement renewable energy such as solar power that rivals conventional electricity for its inexpensive production costs and environmental sustainability.

Heinberg, Richard and David Fridley. Our Renewable Future: Laying the Path for One Hundred Percent