Climate Change in  My Home: NYC

We all know New York City is renowned  for being the capital of the world with its jaw-dropping skyline,  and some may  know it as “the city that never sleeps”. But regardless of the glamourous outlook surrounding New York City,  it’s in danger of the very real impacts  caused by climate change. With an increasing population, the constant development of infrastructure, and the amount of greenhouse gasses being released into the atmosphere, climate change could affect building structures, wetlands, water supply, health, and energy demand. But for me, the most concerning and alarming effect  is the rise of sea-level and costal flooding.

The impacts of climate change in NYC are a very real thing. The annual average temperature statewide have risen about 2.4 degrees since 1970, getting more precipitation in the winter and less precipitation in the summer. One of the biggest threats NYC faces due to climate change is the rising sea levels along coastal lines. Since 1990, sea levels along the New York coast have already risen by more than a foot (12 inches). By 2050, the sea level is expected to rise  as much as 30 inches,  approximately two feet higher in the coastal areas. New York City and its boroughs along coastal lines are the most vulnerable to the impacts of the rising sea level, storm surges and coastal flooding.

In 2012, we were hit hard with Super Storm Sandy. Hurricane Sandy was a category 1 hurricane that turned into a tropical storm; it swept through South Brooklyn neighborhoods and other boroughs. I was affected directly by the floods that occurred in Sheepshead Bay. Water swept through my apartment and the office that I was working at. Everything in my apartment was underwater including pictures, clothes, furniture, and dishes.  Absolutely everything was ruined. Not only that, my workplace had lost all computers, hard drives, paper files and all sorts of legal documents. 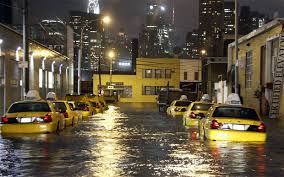 The water  swept and destroyed everything in its path, and the neighborhood was completely submerged under five feet of water. Sandy had caused the water  to elevate  all along the East Coast, costing the city 19 billion dollars in repairs ( Impact of climate change on New York City’s coastal flood hazard). The floods took an immense toll on many low-income families who rented homes in the Coney Island sector of Brooklyn. Many of them lost everything and were completely displaced from their homes. This caused many people,  myself included, to move out of flood-prone zones  of Brooklyn and into safer neighborhoods.

According to studies done by Proceedings of Academy of Sciences of the United States of America (PNAS), they have predicted that storms like Sandy can reoccur every five years by the year 2030. NewYork City isn’t part of the Paris Climate Change Agreement, but Governor Cuomo signed the Community Risk and Resiliency Act (CRRA). It was done to ensure that the applicants for specific permits or funding are able to demonstrate that future climate risks due to sea-level rise, storm surges and flooding have been considered and  incorporated into certain facility-sitting regulations. CRRA also requires New York to promulgate a regulation establishing official projections of sea-level rise.

In April of 2018, Governor Andrew Cuomo also announced a new energy efficiency target to reduce energy costs, thereby reducing energy consumption by 185 trillion BTS, which is equal to the energy used by 1.8 million New York homes. This is good, because in as close to ten years from now, things could become catastrophic for New York.

One innovative technology that could mitigate the impact on climate change here is the use of renewable energy sources. Renewable energy sources such as wind and solar energy are the future of energy production in big cities like this one. This would allow New Yorkers to minimize carbon emission, which is  one of the biggest contributors to climate change and global warming.

Energy efficiency is one of the most important objectives  for improving the climate.

As a student, some simple ways that I can help slow down climate change is by implementing new habits like turning off lights when leaving a room, turning off the computer or TV when it is not in use, switching to energy efficient bulbs, and to recycle. By doing these simple things, we can all help avoid climate change and global warming, thereby reducing the  creation of storms like Super Storm Sandy. In the long-term, this can result in saving people’s lives and saving millions of dollars in damages for the city.