When a member of our group, family, or any of our nation’s important political leaders is severely sick, or in critical condition, we know how much we are all affected, and how much we need doctors for urgent care. In other words, we know how much more we are all concerned about his or her recovery. In the same way, when our apartment, house, building, or vehicle starts to break down, we know how much we want to fix it. In the same way, our planet provides us everything, including water for drinking, air for breathing, land for living, food for eating, and much more. Our planet is in an emergency situation, and it needs intensive care. If we do not attempt to fix it, if we do not listen to climatologists and follow their instructions, or if we don’t stop some of our practices that are harmful to nature, it will be too late in the years to come. The mitigation of climate change is important, and we can take action to heal the planet.

In order for a person to be healed, he has to be sick for some reason, and diagnostics would need to be known to understand why. Our planet has been threatened for a couple of million years, and little by little, its situation is getting worse. Today, no one can say that these climate threats have not been seen nor experienced. As we know, the sea level is rising, flooding is occurring around the world, the temperature keeps rising, ice is melting, carbon dioxide (CO2) gases are increasing in the atmosphere, and populations are being displaced almost everywhere. The consequence of all these events is scarcity: the lack of food and water is almost universal, and there is an imbalance in the geopolitical system. 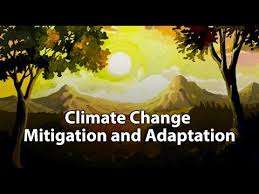 What could we do to bring back our planet? According to geologists, to decrease the earth’s temperature by one 1° Celsius, we need to plant a billion trees. Scientists know how trees consume carbon dioxide from the atmosphere, so what would it cost for more than 154 countries of the world to generate this help? India alone is estimated to have planted 220 million trees in a single day to help mitigate climate change. The concept of renewable energy should be encouraged and adopted as law in every country by political leaders who know the impact of climate change on a country’s economy and infrastructure. Countries like the United States, Canada, China, and others in the European Union are stepping up for change in this domain, but their efforts are  still lacking. In comparison to Turkey, a country that is producing a huge amount of renewable energy, these countries aren’t doing enough as they are the biggest producers of carbon dioxide in the atmosphere. Nature produces energy and solar power produces energy. The involvement of world leaders is required to strengthen technology to combat climate change, including the following: the manufacturing of electrical vehicles and electrical engines, the usage of computers, internet, and the storage of files without the use of paper and books. As water is being conserved in some parts of the world, it is being misused in other parts of the world. We need to take action and respect nature by saving water and producing ways of sharing it. We need to educate the next generation about the importance of their responsibilities and actions in the future.

In conclusion, the mitigation of climate change is crucial. World leaders’ involvement is demanded to accompany scientists in their efforts to change the environment. Each of us has to be conscious in our daily actions to respect  nature, our common “home”. Home will be a better place to live if each of its members knows his or her duties.