Since the beginning of time, humans have been motivated by the pursuit of wealth. To accumulate that wealth, they use different methods. One of the ways that humans always tend to use to become wealthy is through the exploitation of the environment. They exploit natural resources by using them for economic growth, oftentimes with the negative consequence of accompanying environmental degradation. This environmental degradation occurs because most of the time humans exploit mother nature in extremely excessive ways. Even worse, it seems like humans don’t care about the impact that their actions can have on the whole Earth system. To get what they want, people use resources that are on the ground, underground, and also in the water. These resources come from animals, plants, water, and the remains of living organisms.

Much of the food we eat comes from plants, trees, crops, bushes, leaves, and sometimes even roots. The most obvious examples of the foods we source from plants are fruits and vegetables. All  fruits and vegetables grow on plants or trees. Also, trees are used to build objects that we need in everyday life. In addition, trees play a very important role in the Earth system. They contribute to the environment by providing oxygen, improving air quality, ameliorating climate, conserving water, preserving soil, and supporting wildlife. During the process of photosynthesis, trees take in carbon dioxide and produce the oxygen we need to breathe. Most importantly, trees help stop climate change by removing carbon dioxide from the air, storing carbon in the trees and soil, and releasing oxygen into the atmosphere. Trees provide many benefits to us every day. They offer cooling shade, block cold winter winds, attract birds and wildlife, purify our air, prevent soil erosion, clean our water, and add grace and beauty to our homes and communities. Instead of using this resource in a reasonable way, humans prefer to destroy all of the forests and the lands in which trees grow. Humans do these things to make money and to clear more land for construction. 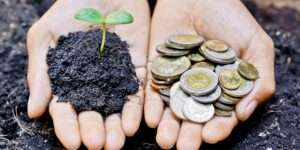 Not all of our food comes from plants. A good portion of the food we eat comes from animals, mostly cattle. Cattle are farmed animals that are specifically raised to be butchered for our food requirements. There are a few other animals that are hunted, and they are killed in their natural habitats. Another source of food is seafood such as fish and other sea creatures like crabs, lobsters, oysters, etc., that we catch. They, too, are consumed by humans and are an important source of food in coastal regions especially. Then there are dairy products such as milk, curd, cream, cheese, butter, eggs, etc. We get these products from animals: all of these are made from milk and/or eggs which come from animals such as cows, buffalo, goats, etc. Honey is also another food we get from animals, namely bees.

All animals have important roles in the ecosystem. There seems to be an ecological balance between all animals in nature. Some animals help to bring out the nutrients from the cycle while others help in the decomposition, carbon, and nitrogen cycles. All animals, insects, and even microorganisms play a role in the ecosystem. All animals and plants in the ecosystem coexist and balance each other out, a system which Mother Nature has perfected over time through trial and error, and it works flawlessly for her. The system that exists in nature is designed for all of the different species of the world: each has a role to play without disturbing the ecological balance. Animals also are being exploited without regard in an effort to just get money. Humans are removing animals from their natural habitat to use their lands for different activities. All of that is happening without people thinking about the consequences.

One of the enterprises people have been invested in is the fossil fuel industry. People are getting extremely rich thanks to it, but this is one of the biggest sources of pollution of the environment. The amount of carbon dioxide that is being released into the environment every single day is very dangerous for life. We cannot talk about climate change without talking about how carbon dioxide contributes to global warming. Once again, rich people don’t care about the consequences as long as they can make money.

There are other products, such as plastic, that people use to make money that can have bad impacts on the environment. Once plastic has been thrown into nature, it does not biodegrade, and this affects the environment in many ways. Plastic can get into the stomachs of certain animals if they consume it, and that can cause the extinction of many animal species.

I think it would be better to see how we are destroying the environment and how our lifestyle is impacting nature before we think about money. After all, what is the purpose of accumulating wealth if we don’t have a good place to enjoy it?