“The clear and present danger of climate change means we cannot burn our way to prosperity. We already rely too heavily on fossil fuels. We need to find a new, sustainable path to the future we want. We need a clean industrial revolution”. –  Ban Ki-moon.

Many people think of global warming and climate change as synonyms, but scientists prefer to use “climate change” when describing the complex shifts now affecting our planet’s weather and climate systems. Human activities are the primary contributor to climate change by causing changes in Earth’s atmosphere through increasing amounts of greenhouse gases, aerosols (small particles), and cloudiness. One of the factors that plays a great role is the burning of fossil fuels which releases carbon dioxide gas to the atmosphere. According to the Environmental Defense Fund, tens of thousands of scientists from different countries conclude that humans are the main cause of climate change.

The fingerprints that humans have left on Earth’s climate are turning up in a diverse range of records and can be seen in the ocean, in the atmosphere, and on the Earth’s surface. Scientists researched and gathered information and evidence which helped them determine the ratio of human’s contributions separately from other factors in climate change. Today, scientists have very high confidence about human-caused global average surface temperature increase—a key climate indicator. Their growing confidence can be seen through the successive climate assessments of the Intergovernmental Panel on Climate Change (IPCC).

When we talk about greenhouse gases, carbon dioxide (CO2) is the main heat-trapping gas largely responsible for most of the average warming over the past several decades. The atmospheric concentration of CO2 has increased dramatically from a pre-industrial era (AD 1000 – 1750) level of approximately 280 parts per million (ppm) to today’s level of 400 ppm.

In addition, the released smoke from cars and power plants and the increased amount of sun radiation cause temperature rise: the former by trapping heat, and the latter by increasing energy which translates into heat. 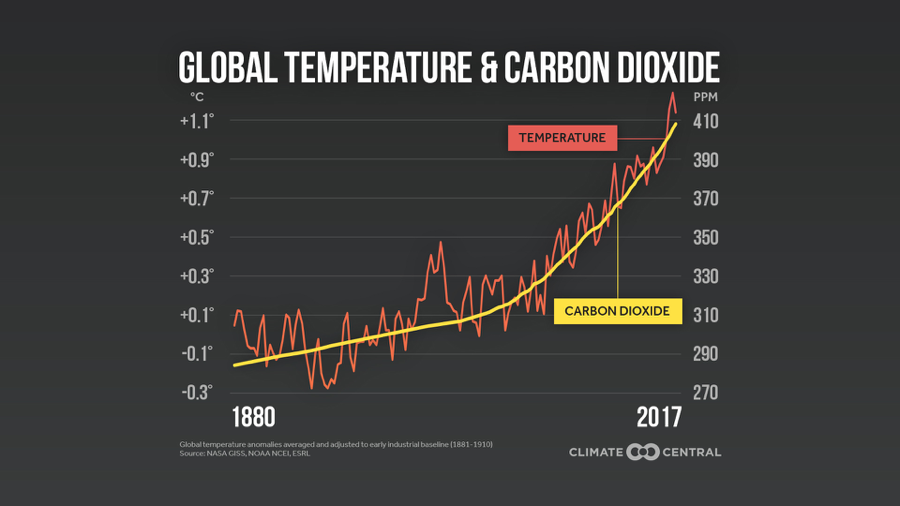 A 2016 study found that “almost two-thirds of the impacts related to atmospheric and ocean temperature can be confidently attributed to anthropogenic forcing”, or human-caused factors. Considering all evidence in totality, it is clear that the increase in atmospheric carbon dioxide concentrations is human-induced and is primarily a result of fossil fuel burning. Similar reasoning can be substantiated for other greenhouse gases, but for some, such as methane and nitrous oxide, their sources are not as clear as those of carbon dioxide.

We can reduce the risk of harmful effects of current and future climate change by taking action to reduce emissions of greenhouse gas pollution that warm our planet. The Environmental Protection Agency (EPA), businesses, and individuals all have an important role to play. More than half the electricity in the United States comes from polluting coal-fired power plants. Furthermore, power plants are the single largest source of heat-trapping gas. Fortunately, the use of alternative energy sources, such as solar, wind, geothermal, and hydro energy, is gaining increased support worldwide.

The principle of carbon offset is fairly simple: deciding that you don’t want to be responsible for accelerating climate change, making efforts to reduce your carbon dioxide emissions, and then paying someone else to further reduce your net emissions by planting trees or by taking up low-carbon technologies. Every unit of carbon that is absorbed by trees—or not emitted due to your funding of renewable energy deployment—offsets the emissions from your fossil fuel use.