Undoubtedly, the global disaster of climate change is hitting hard in Bangladesh. The geographical location of the country makes it more vulnerable to the adverse effects of climate change. The United Nations Children’s Fund (UNICEF) affirms that Bangladesh is experiencing unprecedented human tragedy due to increasing rural-urban migration, floods, cyclones, and environmental degradation, among other reasons. The impacts of climate change in the country are affecting not only the most vulnerable groups in the society- that is, women and children, but also men, resulting in extreme poverty in the region. For instance, more than 50 million people in the country live in poverty, and most of them are situated in ecologically fragile areas such as flood plains, coastal regions, or along river banks. There is a lot of evidence proving that Bangladesh is struggling to survive within the wake of climate change: the rise in temperature within the country, the rise in sea levels, the dynamically changing patterns of drought and rainfall, and saltwater intrusion. Although the country is striving to combat the disasters of climate change, it ought to formulate stringent policies against it also.

At the same time, evidence of climate change in Bangladesh exposes the country’s vulnerability to the disasters to come. Bangladesh’s coastline is experiencing high levels of coastal erosion due to rising sea levels, tidal forces, cyclones, storm surges, and other hydrological dynamics caused by climate change. For instance, environmental research on Bhola Island in Bangladesh suggests that it experiences between 0.3 to 0.4 cm of erosion per day (Islam & Van, 2018). Additionally, the rise in sea levels in the country has displaced millions of families. According to the Center of Excellence for Geospatial Information Science (CEGIS) research, due to the dynamics of the ocean caused by the gradual climate change, Bangladesh is expected to lose almost 18% of its landmass and have a significant rise in sea level of one meter by 2100. The sea level is at risk due to poorly maintained embankments, high monthly tides, floods, and storms. 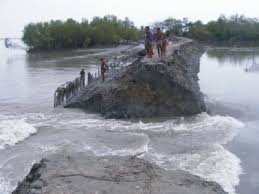 In addition, climate change manifests itself through the variations of the onset and end of monsoon, excessive temperatures, and undetermined patterns of rainfall and drought. Bangladesh’s National Adaptation Programme of Action (NAPA) affirms that the country currently experiences a 4°C rise in temperature above the normal temperatures in the region (Rahman & Lateh, 2017). Furthermore, Dasgupta et al. (2015) report that the southwest part of the country suffers from saline intrusion due to the increase in the sea level, thus reducing freshwater availability in the coastal zones. For instance, the rivers in the Ganges tidal flood plain have become saline, which results in a decline in crop production in the area.

The adverse effects of climate change in the region have led to human security problems, environmental degradation, and immigration. Environmental disasters caused by climate change such as cyclones, floods, and drought jeopardize the security of Bangladesh’s citizens. In 2017, the country experienced major flooding of the river Brahmaputra which rendered thousands of people homeless and damaged their community utilities. According to Islam and Van (2018), the coastal areas are struck by powerful cyclones that kill inhabitants and destroy their property. Multiple cyclones, such as Cyclone Roanu and Cyclone Aila, have hit Bangladesh, leading to the destruction of the environment through erosion, siltation, and flooding. Additionally, together with the drought, the flooding destroys crops and promotes food insecurity in the country. Due to poverty, most of the populations in rural areas are migrating to urban areas like Dhaka. Such migrations lead to loss of labor in the farms, and consequently, to the decline of food production.

In conclusion, Bangladesh’s environmental strategy team ought to incorporate  new and emerging green techniques of combating climate change. Moreover, the country should incorporate effective mechanisms of coastal zone management, disaster management, agricultural management, and water resource management to counter the impacts caused by climate change in the region (Huq et al., 2019). Since Bangladesh shares a similar sea level situation with the Netherlands, Bangladesh’s disaster management body should borrow tips from the Netherlands on how to mitigate disaster. Based on the prevalence of evidence of climate change, Bangladesh should revise its policies on environmental protection and introduce more effective frameworks to combat the impacts. For instance, Huq et al. (2019) affirms that the country may develop a protocol to educate, train, and support the affected populations in the fragile ecological areas to resettle and rehabilitate in new environments. By doing so, the government will solve the problem of forced migration by protecting the displaced population. More extensive research is required to establish the long-term projections of the country’s economic, demographic, and environmental changes to prevent negative impacts of forced migration due to climate change. Although the impact of climate change is undoubtedly being felt globally, some countries such as Bangladesh experience worse consequences.