South Asia lies on the Bay of Bengal with the Indian Ocean towards the south. There are several countries along the Indian Ocean. As I was born in Bangladesh,  I know about my country and its neighboring country, India. Bangladesh is a small country that has a population of 180 million, and India is a huge country with a population of 1.2 billion. Every year, Bangladesh faces a lot of natural disasters like floods, cyclones, tidal bores, and excessive rainfall. Sometimes tsunamis also bring great disaster to the country as well. 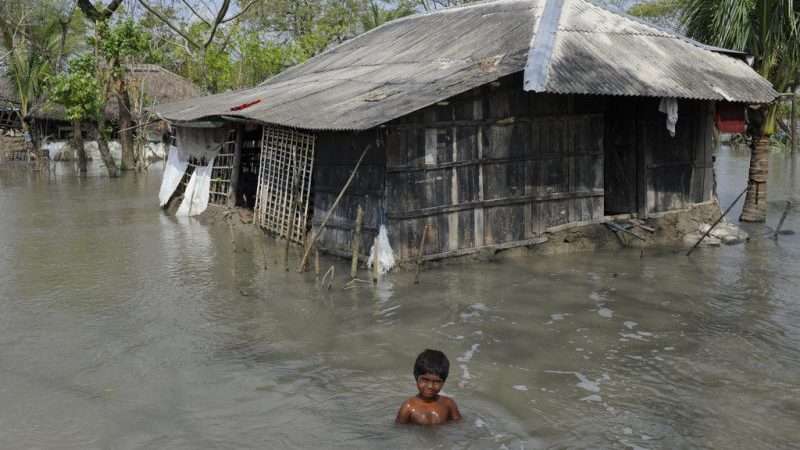 The IPCC ‘s(Intergovernmental Panel on Climate Change) special report on extremes, said its  that climate change “has detectably influenced” conditions that contribute to floods, such as rainfall and snowmelt. The warming world may not induce floods directly, it exacerbates many of the factors that do.

Once I experienced a flood during the summer season in 2004; it affected a large portion of Bangladesh. I was living in Dhaka with my family. The weather was very hot and rainy for several weeks. Due to a low depression area on the Bay of Bengal, the wind started to blow violently one afternoon, and then there was a dark cloud that began to cover the whole sky. In torrents, rain fell; houses were blown away. Trees were uprooted, and building roofs collapsed. Boats capsized, and launches were destroyed. Many villages were severely damaged. A lot of people became homeless; tidal bores swept a lot of other people away. This flood caused many deaths and lasted more than two months. So many villages were immersed when the rain caused the rivers of northwestern Bangladesh to burst over their banks.

Among the many tsunamis Bangladesh has experienced, the last one was on December 26th of 2004. It occurred due to a major earthquake in the Indian Ocean that had an 8.8 to 9.0 magnitude. It created waves up to 100 feet above sea level. Many people died in several countries around the Indian Ocean. In Bangladesh, people didn’t die, but many islands and coastal areas went under water. The southern part of India was severely affected. Many people died along the coastal area, and many houses, buildings, schools, colleges, churches, temples, etc., were destroyed. One island of  Indonesia was completely damaged, and about and about 230,000 people total died in that tsunami.

Besides those calamities, Bangladesh faces another calamity known as river erosion. Every year during rainy season when it rains heavily, water comes down from the north to the Bay of Bengal along the rivers. Such water has great current and speed which cause erosion of soil along the banks of rivers. As a result every year, huge hectares of land break into the water, and many people become homeless and landless. Since this calamity destroys land for cultivation, people of the country suffer a shortage of food. Sometimes, they spend days without food or shelter. People use shanty houses on the roadside or on government land. Sometimes, they destroy forests to make new houses and land for cultivation. This deforestation is also creating an imbalance in the environment of Bangladesh. As a result, during summer the temperature sometimes goes up to 48°C, heat which our country never faced in the past.