Greenhouse gases (GHGs) are gases in Earth’s atmosphere that trap heat and absorb and emit radiant energy within the thermal infrared range. By increasing the heat in the atmosphere, greenhouse gases are responsible for the greenhouse effect which ultimately leads to global warming.

The greenhouse effect occurs because the sun bombards Earth with enormous amounts of radiation that strikes Earth’s atmosphere in the form of visible light,  ultraviolet (UV), infrared (IR), and other types of radiation that are invisible to the human eye. About 30% of the radiation striking the Earth is reflected out to space by clouds, ice, and other reflective surfaces. The remaining 70% is absorbed by the oceans, the land, and the atmosphere. As they absorb radiation and heat up, the oceans, land, and atmosphere release heat in the form of IR thermal radiation, which passes out of the atmosphere into space. The balance between incoming and outgoing radiation keeps Earth’s overall average temperature at about 59 degrees Fahrenheit.

The main greenhouse gases are water vapor, carbon dioxide, methane, ozone, nitrous oxide, and chlorofluorocarbons. The major greenhouse gases responsible for the greenhouse effect are carbon dioxide, ozone, methane, and water vapor. Although these gases comprise 1% of our atmosphere, they act like a thick warm blanket that surrounds the planet and regulates climate control. The greenhouse effect is actually good for us; in fact, it is needed for all of us to survive on planet Earth. The greenhouse effect is a naturally occurring process designed by nature that aids in heating Earth’s surface and helps to maintain ecological balance. Today, we have the opposite problem: too much sun warmth is being trapped in our atmosphere. So much heat is being kept inside by greenhouse gases in the atmosphere that the temperature of the Earth is going up faster than at any previous time in history. 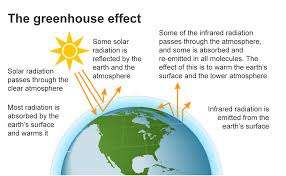 On Earth, human activities are changing the natural greenhouse effect. Over the last century, the burning of fossil fuels like coal and oil has increased the concentration of atmospheric carbon dioxide (CO2). This happens because the coal and oil burning processes combine carbon with oxygen in the air to make CO2. To a lesser extent, the clearing of land for agriculture, industry, and other human activities have increased concentrations of greenhouse gases. The consequences of changing the natural atmospheric greenhouse effect are difficult to predict. As the temperature increases, Earth will become warmer. Some regions may welcome warmer temperatures, but others may not. Warmer conditions will probably lead to more evaporation and precipitation overall, but individual regions will vary, with some becoming wetter and others drier. A stronger greenhouse effect will warm the oceans and partially melt glaciers and other ice, increasing sea levels. Ocean water also will expand if it warms, contributing further to sea level rise. Meanwhile, some crops and other plants may respond favorably to increased atmospheric CO2, growing more vigorously and using water more efficiently. At the same time, higher temperatures and shifting climate patterns may change the areas where crops grow best and affect the makeup of natural plant communities.

It is our responsibility to stop the climate change that is affecting our Earth. There are several ways that we can help to reduce greenhouse gas emissions. One example is to conserve energy as almost half of the greenhouse gas emissions in the U.S. come from the production of electricity and other industrial processes that rely on fossil fuel consumption. Another method is to plant trees since green plants and trees absorb carbon dioxide from the air and release oxygen back into the atmosphere.

Climate change, what is it? Understanding the basic facts about global warming. (n.d.). Retrieved from https://warmheartworldwide.org/climate-change/?gclid=CjwKCAiA_MPuBRB5EiwAHTTvMRDvTFKJSbZ-OGcrQ5NQ8LbXgSsavTsETj4m3iEvbgJJSvlZR21NLxoCshAQAvD_BwE.

Sciencing. (2019). How to Prevent a Greenhouse Effect. [online] Available at: https://sciencing.com/prevent-greenhouse-effect-7947.html.

US EPA. (2019). Overview of Greenhouse Gases | US EPA. [online] Available at: https://www.epa.gov/ghgemissions/overview-greenhouse-gases.