Climate change, or global warming, is the long-term change in the regular weather pattern of a region and ultimately, the whole world.  After the industrial revolution, mean atmospheric temperatures started to rise because of greenhouse gases in the atmosphere. Excessive use of fossil fuels is one of the major causes of global warming.  Climate change directly and/or indirectly causes natural disasters such as cyclones.  A cyclone is a weather system in which wind circles inwardly to an area of low atmospheric pressure.  In the Northern Hemisphere, the rotational pattern is in a counterclockwise direction, and in the Southern Hemisphere, it is in a clockwise direction.  Factors necessary to create cyclones are high humidity, a sea surface temperature of 26 degrees or higher, and strong homogenous winds in the atmosphere.  There are several types of cyclones such as tropical cyclones, extratropical cyclones, and tornadoes. A tropical cyclone is the circulation of low-pressure winds in the weather system that creates thunderstorms without any front that form over warm ocean water. Tropical cyclones are capable of producing extreme winds and heavy rain.  Cyclones also produce high waves which draw more heat and moisture to the system and make them more powerful.  Cyclones usually affect coastal areas. 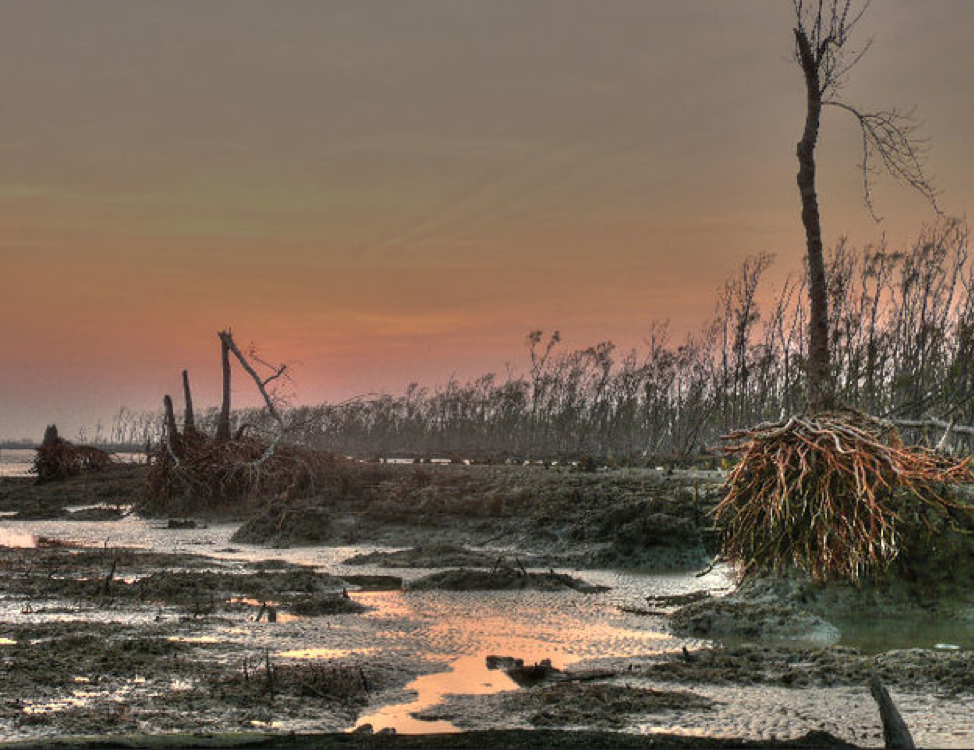 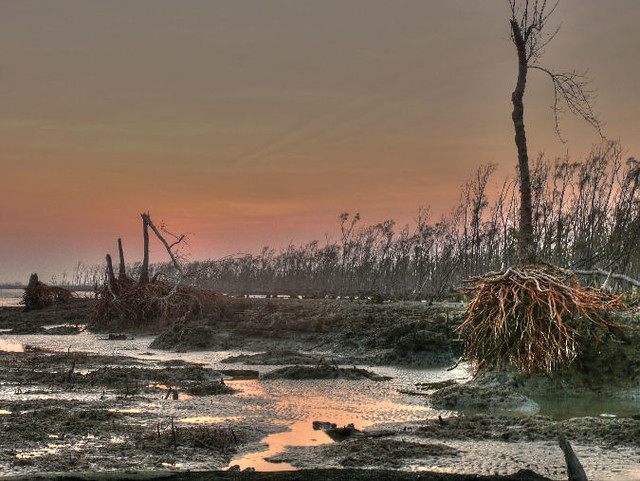 Bangladesh is a densely populated, riverain country in South Asia.  Natural disasters like tropical  storms, cyclones, and floods are common events there.  Bangladesh is highly vulnerable to natural disasters because of its geographical location and its low-lying landscape.  Currently, such storms occur more rapidly and are more devastating due to climate change.  About one-fourth of Bangladesh’s population lives in coastal areas, and the majority of them are directly or indirectly affected by natural disasters. With just one meter of sea level elevation, the country would lose 15% of its land area to flooding; as a result, 50 million people who live in the coastal areas would lose their homes and have to be relocated.

The Bay of Bengal is an extension of the Indian Ocean that narrows toward the shore of the South Coast of Bangladesh.  The narrowing of the water acts as a funnel which directs cyclones toward the shore of Bangladesh. Cyclone Sidr is one of the deadliest and most devastating natural disasters in the history of Bangladesh. It was in November 2007 when the powerful Cyclone Sidr hit the Southern Coastal area of Bangladesh, claiming thousands of people’s lives who lived there. At that time, I was in Dhaka, the capital of Bangladesh. I remember that at that time, the sky was mostly cloudy for a few days, and it was raining every now and then.  The main storm occurred in the evening.  It was continuously raining, slowly with heavy winds. The wind was so strong that it brought down trees and washed away houses. The cyclone hit heavily in the Southern Coastal part of the country.  It destroyed a huge part of the Sundarbans, the largest mangrove forest in the world.  Sidr destroyed trees and killed thousands of people and animals who lived in the forest area. In the process, it completely destroyed the natural ecological system of the area.  Government officials estimated the total number of deaths from Cyclone Sidr to be between 3,100 to 10,000; in contrast, the Red Crescent Society reported on August 18th of that year that the death toll could go as high as 15,000.  According to the Normalized Difference Vegetation Index (NDVI), 45% of the Sundarban area in Bangladesh was affected by the cyclone.  People were homeless because the storm destroyed their houses; most of the forest became covered by the ocean’s salty water, destroying the few manmade ponds inside the forest for drinking water for the animals and people who lived there. Because there was no drinking water for them, they had to drink the unsafe salty water.

Also, Cyclone Sidr badly affected Saint Martin Island, the only coral island in Bangladesh. Sidr was so powerful that it washed away the entire island. A few years after Cyclone Sidr, I went to visit the island. According to a fisherman who witnessed the superstorm, it was in the afternoon when he heard a weird, heavy, windy sound. He and his friend walked toward the shore, and they couldn’t believe what they saw: the entire ocean was dry, and there were beautiful corals – large, small, white, and dark- all over the ocean, and big fish were trapped here and there among them.  After few minutes, they heard the sound of water coming back towards them.  The time was too short to run away, so they decided to hold tightly with the big coral next to them. The fisherman said that the water pressure was so great that when it hit him and his friend that it felt as though to the force would break their ribcages. The cyclone destroyed almost all of the houses and hotels of the island, and it took a few years to restore it. The island was closed for a long time to visitors.

Bangladesh is in great danger of natural disasters like cyclones, floods, hurricanes, etc. because of its geographic location.  Because the majority of its population lives in rural areas, more people are driven away from their homes because of sea level rising day by day. Global warming has become a major threat to our planet.  As the world’s mean temperature rises, it causes the sea levels to rise; therefore, devastating cyclones occur more often than before.