Peru is located in the center of South America, known for its exotic variety of landscapes throughout the whole country. Peru’s Western Coast lies on the Pacific Ocean, full of vegetation from the Andes region, and to the East lies the start of the Amazon River as it flows into Brazil. The climate in Peru is tropical: during the summer, there are usually sunny, mild months, and during the winter, there are warm, rainy months with low temperatures of 59 degrees F. Mild winters benefit Peru because the country is still under development. The residential homes, schools, and buildings in the public sectors were not designed with climate change in mind, nor how the temperature could affect the residents’ lives. As the climate changes, Peruvian residents are suffering from the country’s extremely intense temperature shifts. As a result, the citizens of Peru are trying to adapt slowly to these changes in order to cope with what is getting worse every year. 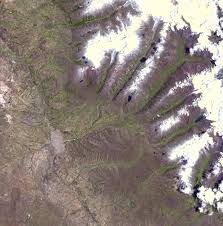 The city of Huaraz and Lake Palcacocha. Photo by NASA/GSFC/METI/ERSDAC/JAROS, and U.S./Japan ASTER Science Team.

I base my observations on my own experience, both as a native of Peru and as a traveler back to the country, where I visited 3 years ago on vacation. It was so depressing; the summer was as hot as New York’s, but in Peru, the humidity level was even more extreme. As I mentioned before, the houses and dwelling spaces were not equipped with air conditioning systems. In New York, we are used to being outside and walking to our houses, schools, work places, or stores. With air conditioning helping us to recover, we can cool down.  In contrast, there is no relief from the heat in Peru. Imagine being in Peru: seeing little kids getting sick because the intensity of the heat and humidity levels are suffocating them. Peru is a poor country where the probability of its residents to buy AC units is very low. I feel that it is terrifying to think of how conditions in Peru are going to be in a few years as the global warming crisis is almost inevitable- based on predictions.

Heavy snowfall in the Cusco Region in 2013. Photo by adan smith, Wikimedia Commons.

If greenhouse gases keep polluting our atmosphere,  they will be trapped between the troposphere and the atmosphere layer bouncing back and forth, reflecting heat energy back to the surface of Earth. This causes the aforementioned greenhouse effect that, literally, is boiling our planet. From this comes effects such as melting ice caps, rising water levels, floods, heat waves, drought, and even dangerous microorganisms, among others, that endanger air quality.

All of the effects mentioned previously affect not only Peru, but the whole world. What is different in Peru and in other undeveloped countries is that the resources to cope with these climate change issues are very limited. The Peruvian government has been trying to solve their internal corruption problems, which is what, I believe, is the main problem there. Slowly but surely, Peru’s leaders have realized that climate change is real, and how greatly the pollution of industrial companies and us as consumers have been a part of this problem. Peru is trying to cut down to a 0% deforestation rate in order to try to capture CO2 emissions and is also trying to avoid environmental tragedies.

“Peru has nearly 70% of the world’s tropical glaciers. Both tropical glaciers and arctic glaciers are in peril” (New Peruvian). As air temperatures rise, the melting of ice becomes more inevitable, and from that come avalanches, water flow increases, and the endangerment of the surrounding population who live near Lake Palcacocha, a glacial lake in the Cordillera Blanca. In 1941, an earthquake caused a piece of ice to break off and fall into the lake, killing around 5,000 people. This catastrophic event is likely to happen again as the National Aeronautics and Space Administration (NASA) has alerted the city to a fissure in the glacier above Lake Palcacocha. This, again, creates a danger for the people in its vicinity. In response, the government is trying to melt the glacier to avoid catastrophe.

In conclusion, my take on climate change in my country Peru, and worldwide, is that the denial of climate change has caused most of the problems. Maybe here in New York, where people who had access to the tools to avoid climate change effects, instead denied what was going on in our planet. This could be the answer why the United States has pulled out of every government proposal or solution. What was seen as fairy tales years ago is becoming real to many, forcing an imminent recognition. I believe we all have to change and help each other to ensure we can move forward and heal the planet. To try to ensure Earth’s resources be replenished naturally for the next generations is the right thing to do, as rational human beings understand.