What’s the Next Big Step for Climate Change in the Big Apple?

Climate change is having a big effect on the world, and some may turn their eye away from this issue and continue to tell themselves this isn’t happening. It will soon bite them back. This blog will focus on the effects that climate change will have on New York City. We have seen climate change impacts on New York City before with Super Storm Sandy in 2012. The damages were devastating. Homes were lost, businesses were lost, and lives were lost. The sea level rising caused MTA subway lines to flood and shut down. To prevent these impacts we have to better prepare for them.

We need to combat some of the main reasons causing climate changes. Climate change is mostly caused by carbon dioxide, which comes from deforestation, land use changes, and fossil fuel burners such as cars, buses, buildings and factories. Another greenhouse gase (GHG) is Methane, which comes from waste in landfills, agriculture, and from natural causes. (California Institute of Technology 3). If we don’t try to stop or at least slow down climate change, New York City’s inevitable fate will come sooner than we think. In a recent study in the article published by New York Magazine, author Andrew Rice used 3-D Google Earth App to predict the effect sea level rise will have on New York City. He stated that when using google earth, he added an additional 6 feet of sea level and his 86-year old building located at Canal and Varick street was turned almost into an island. And when he added 10 feet more, most of the lower east side and Battery Park was flooded. (Rice 10/11)

Today we will be looking at three things to combat the issue of Climate Change in New York City: 1) Mayor Bill De Blasio’s One City: Built To Last plan/80×50 plan, 2) De Blasio’s NYC Clean Feet plan, and 3) the East Side Coastal Resiliency Project otherwise known as The Big U.

One of the main causes of greenhouse gas emissions in New York City are its buildings.

This plan will be very beneficial to our city; it is predicted to reduce 2.7 million metric tons of GHG emissions from buildings, save hundreds of millions of dollars in energy costs, while creating jobs for people in the process. Also by proceeding with this plan, other programs are set to help with it, which helps increase the chances of Bill De Blasio’s 80×50 plan which will create even more jobs and energy savings for building owners and tenants. This plan can help change the way to live in our city and help prevent or slow down the horrible future that climate change has in store for New York City. 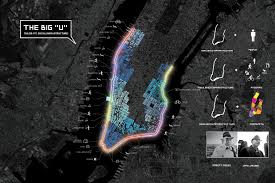 Finally, the BIG U proposal is geared to protect Lower Manhattan from floodwater, storms, and other climate change impacts.  This will be a barrier to protect the low-lying topography of Manhattan beginning at West 57th Street, going down to The Battery, and then back up to East 42nd Street.

It is important to know how climate change affects our world and that this is a serious issue that we cannot avoid. The least we can do is try to slow the process. That is by following through with the plans set by the mayor Bill De Blasio’s climate change plan to reduce our use in greenhouse gases and try to prevent New York City into becoming the next Atlantis. Hopefully by being successful in this plans, New York City could be an influence and model to other cities and might cause a reaction for others to be energy efficient and energy clean.

California Institute of Technology. “A Blanket Around Earth” 13 December 2016. Web.