The effects of climate change obviously include the warming of the ocean and the overall air temperature.  According to the National Oceanic and Atmospheric Administration  (NOAA), the planet’s ocean has been absorbing more than 90 percent of the planet’s heat. As this heat is absorbed deep in the ocean, it raises ocean temperatures and accelerates the melting of the polar glaciers and ice sheets. As said in the first sentence of this blog post, hurricanes gain energy from warm waters. Hurricanes may gain an increase of energy by intensifying its wind speeds. According to a study by the Geophysical Fluid Dynamics Laboratory, scientists, based on sophisticated computer modeling, expect a 2-11 percent increase in average maximum wind speed by 2100. In the same study, scientists also expect rainfall to increase by 20 percent due to the warmer water. 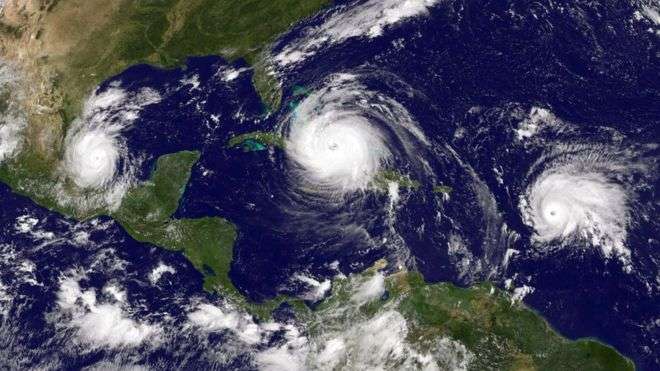 As stated in the previous paragraph, polar ice is melting due to the ocean absorbing much of the planet’s heat. This causes sea levels to rise more than they should. The rising sea levels cause storm surges produced by hurricanes to be deadlier than before. Hurricane Katrina caused a 28-foot storm surge that ended up flooding and destroying much of the city. According to a study by the three Working Groups of the Intergovernmental Panel on Climate Change, sea levels are expected to rise 0.5 – 1 meter by 2100, amplifying storm surge. Hurricane Sandy caused about $65 billion in damages in the New York Tri-State area due to storm surge.

Hurricane Harvey was a hurricane that made the correlation between climate change and hurricanes a public issue. Harvey was a category 4 hurricane that caused devastation in Texas and parts of Louisiana. It caused $125 billion in damages and directly killed 68 people. Compared to Hurricane Florence, which caused 17.5 inches of rain to fall, Hurricane Harvey caused 25.6 inches of rain to fall. Also, studies showed that Harvey dropped three times more water in Texas than Florence did in the Carolinas. Harvey also produced more than 40 inches of rain in an area 20 times larger than Florence did. According to The Weather Channel, these rainfall events have a 0.1 percent chance of happening in any given year.

There is enough evidence to suggest that climate change is making hurricanes, also including typhoons and cyclones, stronger and more frequent. Looking at data regarding the ocean’s temperature and what rising sea levels can cause, we must take initiative at this moment rather than later. Making Mother Nature “angrier” will be our demise.