According to the business dictionary urbanization is an increase in a population in cities and towns versus rural areas. Urbanization began during the industrial revolution, when workers moved towards manufacturing hubs in cities to obtain jobs in factories as agricultural jobs became less common. More than half the world’s population today lives in cities, and another 2.5 billion people are expected to join them by 2050. The frequency of torrential rain and storm surges is on the rise in big, densely populated cities like New York, Mumbai and Jakarta, hitting those living in marginalized, informal settlements like slums the hardest. Desertification swallows arable land needed to feed swelling urban populations. And sea level rise threatens everyone living in coastal areas, delta regions, and small-island countries. Temperatures are already rising in cities around the world due to both climate change and the urban heat island effect. Mean annual temperatures in 39 cities have increased at a rate of 0.12 to 0.45°C per decade over the 1961 to 2010 time period. Therefore, there is need to pay more attention to the impacts of urban heat island effects on future climate change. 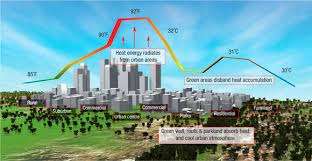 Urbanization tends to be associated with elevated surface and air temperature, a condition referred to as the urban heat island. As urban areas develop, changes occur in their landscape. Buildings, roads, and other infrastructure replace open land and vegetation. Surfaces that were once permeable and moist become impermeable and dry. These changes cause urban regions to become warmer than their rural surroundings, forming an “island” of higher temperatures in the landscape. Urban centers and cities are often several degrees warmer than surrounding areas due to presence of heat absorbing materials, reduced evaporative cooling caused by lack of vegetation, and production of waste heat. While some impacts may be beneficial such as lengthening the plant growth season the majority its effects are negative and contribute to global warming such as increase energy consumption. This occurs when elevated temperature leads to increase demand for cooling which results in higher energy consumption. Elevated emission of air pollution and greenhouse gases, as described above, urban heat islands raise demand for electrical energy in summer, companies that supply electricity typically rely on fossil fuel power plants to meet much of this demand, which in turn leads to an increase in air pollutant and greenhouse gas emissions. The primary pollutants from power plants include sulfur oxide ,mercury, carbon monoxide, particulate matter and nitrogen oxides just to name a few. These pollutants are harmful to human health and also contribute to complex air quality problems such as the formation of ground- level ozone (smog) which is formed when nitrogen oxides and volatile organic compounds react in the presence of sunlight and hot weather. Impaired water quality due to High pavement and rooftop surface temperatures can heat storm water runoff. This heated storm water generally becomes runoff, which drains into storm sewers and raises water temperatures as it is released into streams, rivers, ponds, and lakes. Water temperature affects all aspects of aquatic life, especially the metabolism and reproduction of many aquatic species. Rapid temperature changes in aquatic ecosystems resulting from warm storm water runoff can be particularly stressful, even fatal to aquatic life.

Governmental entities at all levels playing their part are very critical in the control and reduction of this effect. To reduce the heat island effect and its associated risks over the longer term, communities can use four main strategies. Creating green roofs, a green roof, or rooftop garden, is a vegetative layer grown on a rooftop. Green roofs provide shade, remove heat from the air, and reduce temperatures of the roof surface and surrounding air. Increase tree and vegetative cover, trees and vegetation are most useful as a mitigation strategy when planted in strategic locations around buildings or to shade pavement in parking lots and on streets. Researchers have found that planting deciduous trees or vines to the west is typically most effective for cooling a building, especially if they shade windows and part of the building’s roof. Using cool pavements, the term currently refers to paving materials that reflect more solar energy, enhance water evaporation, or have been otherwise modified to remain cooler than conventional pavements. Installing cool reflecting roofs, a high solar reflectance—or albedo—is the most important characteristic of a cool roof as it helps to reflect sunlight and heat away from a building, reducing roof temperatures. A cool roof transfers less heat to the building below, so the building stays cooler and uses less energy for air conditioning. By lowering energy use, cool roofs decrease the production of associated air pollution and greenhouse gas emissions. With this knowledge we as individuals need to combine our knowledge along with policies to create change before it becomes regrettably too late.

Which of your friends needs to learn this term? (n.d.). In BusinessDictionary.com. Retrieved from http://www.businessdictionary.com/definition/urbanization.html