The main components of the plastic bag are polyethylene (PE), polyvinyl chloride (PV), polypropylene (PP), polystyrene resin (PS), and these are petroleum extracts. According to the US Environmental Protection Agency, 11 barrels of crude oil is needed to produce 1 ton of plastic bags. An analysis of the environmental sector in Japan and Germany shows that 1,000 kilograms of polyethylene is required to produce 50,000 plastic bags. At present, China uses more than 3 billion plastic bags each year, and the annual use of plastic bags exceeds 100 billion. Count as each plastic bag weight 3 grams, China consumes 9 000 tons of plastic bags every day, which is 99,000 barrels of crude oil. There are two main solution to deal with waste plastics: Landfill and incineration. Waste plastics will not only occupy a large amount of land with landfill, but the occupied land will not be restored for a long time, which will affect the sustainable use of the land. Since waste plastic products entering domestic garbage are not degraded for 200 years if they are landfilled, this has increased the pressure on land resources. Human beings not only have our generation to be surrounded by garbage, but also to make future generations lose their space for survival.

Nowadays, the main treatment method for plastic bags is incineration. Incineration produces a substance called dioxins. It is currently known that the greatest hazard of this substance is irreversible “triad” toxicity, which are teratogenic, carcinogenic and mutagenic. It is “the most toxic of environmental hormones.” Once it gets in the human body or wild animals through the environmental media and food chain, it will interfere with its endocrine system and reproductive function system, affecting the survival and reproduction of future generations.

Dioxin is a colorless and odorless fat-soluble substance. It is very toxic. It is 130 times of cyanide and 900 times of arsenic. It is called “century poison”. The International Agency for Research on Cancer has listed it as a human primary carcinogen. Although most of us don’t realize this, producing plastic bags, compostable plastics, and even paper bags contribute significantly to global warming. Greenhouse gases are the result of emissions from fossil fuel combustion during the production of plastic bags and paper bags. The infrared radiation from the surface of the earth is grouped to escape to the external space, causing a greenhouse effect. The consequence is global warming. Environmental experts say that “dioxins” are often found in the atmosphere, soil and water with tiny particles. The main sources of pollution are the chemical metallurgical industry, waste incineration, paper-making and the production of pesticides. The polyvinyl chloride plastic bags used in people’s daily life contain chlorine, which is released when the articles are burned and suspended in the air. Since nitrogen can flow in the environment, the same nitrogen atom can have many negative effects, such as air, land, fresh water, marine systems and human health. These negative effects will last for a long time and are called the “nitrogen cascade”. Excessive nitrogen in the environment can cause many problems, including: Severe eutrophication can lead to deaths in coastal dead zones and fish (high concentrations of nutrients, resulting in excessive plant growth and hypoxia in water). More than 500 coastal death zones have been discovered in areas that have been fully studied globally, and in 2003 there were only about 150 oxygen depleted areas. Once other regions begin reporting, it is expected that there will be more than 1,000 coastal and marine areas with eutrophication. Nitrogen released into the air, especially nitrous oxide, is one of the causes of climate change. It often referred to as “forgotten greenhouse gases.” In a hundred years, the greenhouse gas intensity of nitrous oxide is more than 300 times that of carbon dioxide. Human activities such as agriculture, deforestation and fossil fuel combustion are also the main reasons for the increasing nitrous oxide in the atmosphere. Now, incineration of plastic products provides another new way to increase nitrous oxide in the air. The World Health Organization estimates that the number of premature deaths caused by global air pollution in 2012 reached 7 million (one in eight people died of air pollution), twice as previously estimated. Air pollution is the main cause of environmental deaths. Sufficient data shows that air quality in many cities around the world has deteriorated compared to previous years. The World Health Organization’s annual average fine particulate matter standard is 25 μg/m3. The economic impact of deaths and diseases caused by outdoor air pollution in OECD countries was as high as $1.7 trillion in 2010 alone. Studies have shown that transportation accounts for nearly 50%. The plastic invention of 1907 was considered an important breakthrough in human history. Over the years, we have only seen the benefits of plastics, but have ignored their damage to human health, natural ecosystems and climate. 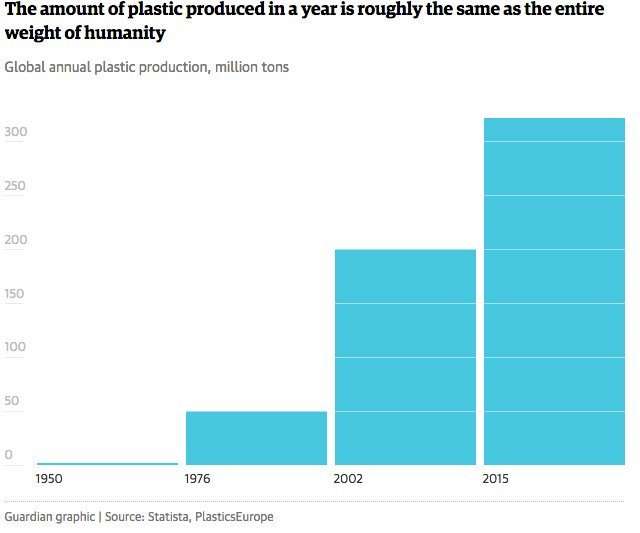 Plastics cause great environmental problems due to their properties: first, plastics are not degradable; secondly, toxic substances are produced during plastic production. (Hydrocarbon molecules extracted from refining and natural gas); in addition, how to properly handle the used plastic products is also an urgent problem to be solved. Waste plastic products not only pollute the environment, but as a petroleum product, the manufacturing process like refined oil also has an impact on the environment and climate. According to estimates by the US Environmental Protection Agency, today’s plastic products account for about 8% of global oil production. Oil drilling and processing of plastic products will release harmful gases into the atmosphere, including carbon monoxide, hydrogen sulfide, ozone, benzene and methane (a greenhouse gas that triggers a more serious greenhouse effect than carbon dioxide). Producing one ounce of polyethylene terephthalate (also known as PET, the most commonly used plastic for making water bottles) emits five ounces of carbon dioxide.
In summary, plastics are closely related to global warming, and global warming is one of the most pressing issues facing the planet today. We believe that the fact that consumer plastics will exacerbate climate change. Thus, the Chinese government introduced a policy a few years ago, that is, the compensation of plastic bags, supermarkets and other stores no longer provide plastic bags for free, just to cultivate the habit of using less plastic bags and the concept of recycling. At present, many countries have implemented the policy of charging plastic bags. Although this does not fundamentally solve the problem of plastic contamination and burning plastics, it does reduce the number of times people use plastic. The best way to solve the pollution caused by plastic bags is to not use or find alternative products. For our survival and living environment, we recommend that you use plastic bags as little as possible, or reuse them, or use only degradable ones to reduce the pollution they cause to the earth.

The Silencing of Science by M.Annenberg, ClimateYou Guest Contributor

(Editor’s Note:  This essay is excerpted from Artist/Writer M.Annenberg’s  artist talk about the melting glaciers of the Hindu Kush) American democracy is skating on thin ice, when the potential loss of drinking water for one billion people, because of melting glaciers, is not considered news in the American

Despite SCOTUS & Manchin, We Can Still Fight Climate Change

Alarm bells went off last month when the Supreme Court’s ruling clamped down on the Environmental Protection Agency’s regulatory authority to control carbon dioxide (CO2) emissions under the Clean Air Act. CO2 emissions are the main source of greenhouse gases causing the earth to overheat, changing the climate