Mean sea level (MSL) is the average (mean) height of the sea, with reference to a suitable reference surface. Sea level rise is one of the most tangible and readily acknowledged consequences of climate change. Bangladesh climate is torrid with a malleable winter from October to March, with a hot and humid summer from March to June. Bangladesh experiences heavy rain falls and has high average precipitation. The majority of the rain falls occur during the monsoon season which is a result of the difference between high and low air pressures caused by differential heating of land and water. The climate of Bangladesh contributes to much of the natural disasters including tropical cyclones and flooding. In last century, the mean temperature of Bangladesh has increased 0.50C which caused 0.5m mean sea level rise. Due to the greenhouse effect, the temperature is rising significantly and this temperature rise is the reason for sea level rise. Many low parts of the world will go under water because of this climate change. It is definitely a major threat for the Bangladeshi people.

The sea level is rising faster day by day In Bangladesh

In the next few decades, the sea level may increase much faster than expected. A new research report showed that as long as the vast ice block in Antarctica was stabilized, it would not be possible to increase the temperature of the Earth. The United Nations Climate Scientists predicted, in this century sea level may increase up to one meter. But there was no prediction about the impact of Antarctica because it was expected that the growing snow would keep the ice balance. The research report published in the journal Nature said that if the carbon emissions are not reduced, the height of sea surface may be doubled in the 21st century. Previously Antarctic ice thunders were considered as hot water and sea water. But the new study has taken into consideration the melting of ice cliff bunds. Professor Robert Dickontoo, of the University of Massachusetts Amherst, has led to the preparation of this research report. He said that if the height of the sea surface continues to increase at double speed, there will be disasters for many low cities. He also said that if the growth of the Earth’s heat does not stop, then the increase in sea surface height will change from millimeter to centimeters per year. In that case, rather than those cities, it will be untouched and defense engineering will not work.

There will be huge destructions in the lower cities like New York, Mumbai and Guangzhou, due to the severe storms that are rising in the sea level due to climate change. A study report by World Bank and OECD staff has said that the damage to the flood, if the measures taken against the rapid growth of the population in coastal areas, will stand at 1 trillion US dollars by 2050.

The Coastal Zone of Bangladesh 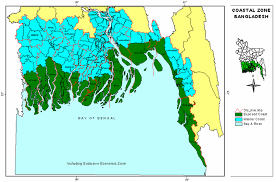 The coast of Bangladesh is home to approximately 46 million people. It covers an area of 47,201 km2. The floodplain of the Bengal delta comprises 2.85 million hectors of cultivable land and supports 20% of the rise acreage of Bangladesh.

The Coast of Bangladesh has the six coastal zones:

Sundarbans may be lost in the sea

The world’s largest mangrove forest is Sundarbans. In this forest, the world-famous Royal Bengal Tiger exists. However, due to the increase of water level every year, the Sundarbans may be lost in the sea. The World Bank has reported that the water level of the sea is rising very quickly in the Sundarbans area. According to the study, the level of sea water can increase up to 3 to 8 millimeters per year. As a result, scientists are not blowing up the possibility of submerging the Sundarbans. If such incidents happen, the wildlife of the Sundarbans will suffer from the worst of all. As a result of this erosion and increasing water level, observers are blaming various works of expansion of natural and homogeneous people. It has also been said that tsunamis and earthquake events have been the reason for the changes in the past few years in the Sundarbans. If this increase in the level of water does not stop then in the next few decades the storm surge will be destroyed by Ghormama Island of the sea block of the Sundarbans. World Bank Advisor Sanjay Gupta said that this study has brought a very alarming message for the Sundarbans. He needs to take action very quickly to deal with this problem, he said. It has been reported that if the water level is increased by 45 cm only then 75 percent of the Sundarbans spread in India and Bangladesh will be absorbed in the oceans.

Bangladesh has got global attention as it has been considered as a dangerous zone. Many parts of West Bengal, Bangladesh might go underwater in future due to sea level rise. It has become one of the major threats for Bangladesh. To overcome this upcoming deadly situation, the government is taking proper and necessary steps to make people conscious. At earlier levels of education the topic of sea level rise and its dangers should be discusses to make the next generation aware and to improve the present situations.