Climate change is a result of long-term effects, it can be related as an imbalance of energy whereby what goes in doesn’t go out. For example, imagine you deposit $1000 in your bank account every month, but make a withdrawal of $1300 every month. Within eight months a savings account of $10000 will be overdrawn by $400 because its withdrawal has exceeded its available balance. This banking analogy explains the radiated imbalance in the energy level between earth and space energy transfer. Thus, the higher the temperature the shorter the λ(wavelength) of energy given back & vice versa. λ (Lamda) ~2900/T (Winds Law).

It will take over a century for us to bring the climate back to its normal state because of the 100-year residency time of the green-house gases, hence, mitigating climate change is a daunting task spread over two hands, on the one hand is the necessity to slow global warming through controlling CO2 content in the atmosphere while the other hand holds managing solar radiation received by Earth. Controlling CO2 concentration in the atmosphere can be done through reduction of emissions and/or by removal through three (3) means: Air Scrubbing – It is believed that it is technologically possible, but very expensive to scrub CO2 from the atmosphere. The technology termed direct air capture (DAC) powered by low-grade waste heat uses 18 Climeworks carbon dioxide collectors atop a waste utilization plant to filter CO2 from the atmosphere, the concentrated CO2 is supplied to a greenhouse – where its then used as fertilizer to grow tomatoes and cucumbers. In a 12-month period, the facility in Switzerland where this device is presently located filtered an estimated 900 tonnes of CO2, equivalent to the annual emissions produced by 200 passenger vehicles.

Changes in Energy-Usage Technologies – The need for carbon-free energy technologies is an investment worth pursuing if only governments will act, at least we can make significant changes now by reducing CO2 emissions from our gasoline powered cars and fossil-fuel plants. 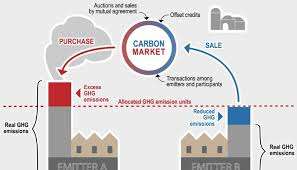 Ocean Fertilization: This approach proposes the fertilization of the ocean to stimulate massive blooms of (phytoplankton) photosynthetic algae, which would draw down atmospheric CO2 as part of their life processes in the form of particulate organic carbon (POC). Although very easy to accomplish, but what effects would be the repercussion from such tampering of ocean life? Eleven (11) field studies in different ocean regions examined the impact of iron as a limiting nutrient for phytoplankton by adding small quantities (1-10 tons) of FeSO4 (iron sulphate) to the ocean. Addition of iron will only impact ~30% of the oceans (Southern Ocean, Equatorial Pacific and Sub-Arctic Pacific) due to the depletion of iron in these oceans. Nitrogen fertilization is also another option being considered.

Rock Weathering: Orogenesis (mountain building) process which triggers accelerated weathering of rocks. The chemical decomposition in this process brings down atmospheric CO2 to carbonic acid, which completes the rock weathering. Knowing this process, the idea is to fracture and pulverize large masses of igneous rocks to increase rock weathering and draw down atmospheric CO2. Although the process works, it is geologically slow.

The other hand is Managing Incoming Solar Radiation with the following approaches:

Cloud Brightening – It is believed that sea salts could be sprayed into clouds to brighten them and increase their albedo (how much energy is reflected back to space) which will achieve a real but localized result.

Sulfates in The Stratosphere: From the impacts of volcanoes El Chichon and Mount Pinatubo in 1982 & 1991. the Plinian (volcanic eruption in which a narrow stream of gas and ash is violently ejected from a vent to a height of several miles) eruptions shot SO2 (sulfur dioxide) into the stratosphere and caused global cooling for many months. Based on this premise, it is postulated that if we send millions of tonnes of sulfate into the stratosphere by balloon, plane or cannon; these tiny reflective particles in the stratosphere would cool the planet quickly; unfortunately, we do not know the risks. Another example of aerosols are desert dusts, due to the mineral composition of the dust, the particles absorb sunlight as well as scatter it. Through this absorption, the dust particles warm the layer of the atmosphere where they reside. The warmer air inhibits the formation of storm clouds, and by suppressing the storm clouds and their resulting rain; scientists believe the dust veil promotes desert expansion.

The fastest and easiest way we can reduce anthropogenic impact on the climate are by reducing these four (4) pollutants – Black Carbon: a component of soot that absorbs solar radiation, it is produced by incomplete combustion of diesel fuels and bio-fuels such as wood. By placing particulate filters on diesel engines and using clean-burning cookstoves for burning wood or gung, we can reduce black carbon.

Hydrofluorocarbons (HFC): Mostly used in refrigerants, the leaks of HFCs to the atmosphere is more dangerous and 1400 times more potent than CO2.

Ozone presence in the Troposphere: a component of smog that absorbs solar radiation. Ozone is formed when sunlight interacts with hydrocarbons and nitrogen oxides (NO, NO2) are emitted by cars, fossil-fuel plants, and as gasoline vapors. Better combustion methods are necessary and within our power in other to reduce global warming.

The impact of climate change is not limited to developed/western countries alone, it is felt across the Atlantic whether it’s far away Australia, Asia, or Africa. Flooding similar to that of Nigeria and the United States were both linked to climate change, the aftermaths of such events are equally devastating in terms of monetary cost, human lives, and the emotional tolls on victims. The 2012 flooding in Nigeria displaced two million and with 363 deaths. In 2015, 100,000 people were displaced with 53 deaths; in 2016 – 92,000 were displaced while with 38 deaths, and in 2017 250,000 were affected by floods. The United States has experienced a rise in frequency and intensity in hurricane activity accompanied by floods as well. Hurricane Katrina killed about 1,800 people in 2005; Super Storm Sandy a Hybrid Hurricane killed 147 people in 2012; Hurricanes Harvey & Maria killed 106 and 3,057 people in 2017. These are too many lives that were taken away from this world and their families. Infrastructures and technologies might be different between Nigeria and the United States, but such losses are still unacceptable.

Dr. Blake a professor in Geophysics at CUNY once said, “The goal of learning is to expand one’s horizon and not to be limited to a specific discipline”; with this in mind what can our chosen discipline do to impact tomorrow for the better; why don’t we apply what we’ve learned or learn more by pulling our resources, hearts and minds together? Other ways in stopping climate change are: Adaptation – planting more trees and painting rooftops white to reflect solar radiation. Mitigation – Getting rid of greenhouse gases. Solutions we can apply are: Evapotranspiration (the process by which water is transferred from the land to the atmosphere by evaporation from the soil and other surfaces and by transpiration from plants) – trees cooling the Earth; Surface roughness. Let’s influence the parts we can rather than fold our hands & watch.

Allen, Bob. “Atmospheric Aerosols: What Are They, and Why Are They So Important?” NASA, NASA, 6 Apr. 2015, www.nasa.gov/centers/langley/news/factsheets/Aerosols.html.