Climate change refers to the change in the statistical properties of the climate’s system. It refers to the alteration of the global weather patterns that have led to the rise in sea levels and temperatures in the world. Climate change can be either the change in weather patterns or temperatures in the oceans, land surfaces, and ice sheets. Due to climate changes, the natural temperature regulators have continued to be altered that has further contributed to global warming. As a result, the natural world has continued to experience irreversible damages that have changed the population of various types of species present. The Galapagos Islands are an archipelago of volcanic islands considered to be part of Ecuador located on the eastern Pacific Ocean. The islands are volcanic upheavals that emerged at the bottom of the Pacific Ocean. Due to the uniqueness of the islands and species present, the Galapagos has attracted many tourists all over the world. However, the climate change problem has continued to have adverse effects on the Galapagos Islands.

Climate change in the Galapagos is affecting the marine life in the islands.  The Galapagos Islands are located in a region where some of the major ocean currents such as the Humboldt Current, the Panama Current, and the cold Cromwell Current converge. However, climate changes have resulted in the slowing of the cool Humboldt Current that has contributed to the rise in sea temperatures. It has been revealed that the waters of the Galapagos Islands have been warming up since the 1970s. Due to the rise in these sea temperatures, the growth rate and abundance of some of the marine species such as the algae and seaweed has started to reduce. Furthermore, the algae and the seaweed are some of the significant sources of food for many of the creatures found in the Galapagos waters such as the marine iguanas, flightless cormorant, and Galapagos penguins. 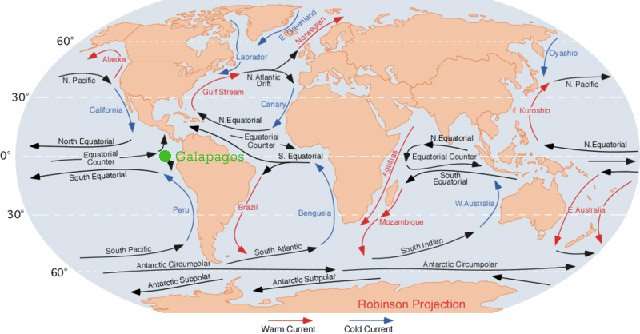 The reduction in the growth rate and abundance of algae and seaweed, in the future, would hurt the sea creatures as they would be under threat by starvation. Some may be forced to migrate away from the Galapagos Islands, and those that cannot migrate may die due to limited food sources. Additionally, not only are these creatures threatened by starvation, but their reproductive patterns have also started to change with some of the sea creatures reproducing at a lower rate. This acts as a threat to the future extinction of some of the marine life in the Galapagos Islands.

Another effect on the Galapagos Islands that has resulted due to climate change is on the land-based creatures. In the Galapagos, El Nino is a natural climate phenomenon that usually occurs after every year with the region experiencing warm and cold temperatures. Due to climate changes, increased rainfall and temperatures have continued to be witnessed over the years during El Nino. Many of the land species have been negatively affected by the increased rain during El Nino. The increased rainfalls have continued to wash away some of the eggs of the land species such as the tortoise. Continuous draughts and hot temperatures after El Nino have further worsened the situation leading to the death of many plant and animal species in the islands.

Apart from the El Nino effects, decreases in rainfall and increase in temperature have continued to be experienced in the normal years. These changes have negatively affected the lives of land creatures and plants. The blue-footed boobies, for example, that have continued to attract many tourists in the islands have drastically decreased in number. The famed giant tortoises in the Galapagos Islands have also continued to decline in number over the years. The reduction of the land species has been associated with climate change as the increase in temperatures, and the decrease in rainfalls have resulted in reproduction patterns due to the reduction of food supply.

Another effect of climate change to the Galapagos Island is on tourism. The islands have been a treasure trove of wildlife over the years. Every year many tourists visit the Galapagos Islands to see the unique animal species in their natural habitat such as the frigate birds, huge iguanas, sea lions, and giant tortoises amongst many more others. The unique species in the islands have contributed to the booming state of tourism in the Galapagos Islands. The government has continued to generate a considerable amount of revenue due to the thriving tourism sector. However, through climate changes that have continued to be witnessed, the tourism sector in the Galapagos has continued to be negatively affected. Due to the climate changes the various animal species that have largely attracted tourists have continued to decline over the years. As a result, the tourism industry has witnessed a reduction in the number of tourists coming into the islands.

Climate change has negatively impacted the Galapagos Islands. The major areas that have been affected the islands are marine life, land species, and the tourism sector. The significant traits associated with the affected areas include the negative impact of climate change of the species present in the area and food supply. There is, therefore, a need for measures to be put in place by the government of the islands to help in dealing with climate change. However, climate change is a global issue, and the government alone cannot curb the problem on its own. The Galapagos Islands, for example, share the Pacific Ocean with many islands and countries in the world. To deal with the rising temperature problem in the ocean, we all need to work together with other countries that it shares with to deal with the issue effectively.