The debate on climate change is more important now than ever, although acting is not limited to the super powers of the world alone or so-called information rich countries. The dangers we face today puts all countries on the same boat, shall we rise together, or shall we sink together are the questions we should ask ourselves. The impacts of climate change will be explored in subsequent paragraphs.

Economy: How are the impacts of climate change measured? The DICE (Dynamic Integrated model of Climate and the Economy) a closed-loop system that factors in emissions, concentrations, climate change and emissions controls are used along with an extensive analysis of the model’s results. The usefulness of the model is in estimating the costs and benefits of different paths for slowing climate change and for analyzing the impact of control strategies over a period of 30 years. At the present state of the climate, it is believed that if we continue the current path with all countries keeping their commitments to the Paris Climate Agreement, and temperature rises by 2.5%, the global gross domestic product (GDP) will fall 15%. A temperature increase to 30C, GDP falls 25%. If we stay on our current course of denial in service of our political base or macho ideology, the worlds temperature is expected to rise 40C by year 2100 with the global GDP declining more than 30%, which is worse than the great depression. According to a study from Journal Nature in 2016, droughts and extreme heat have cut cereal production by 9% to 10% on average around the world in the last-half century and continues to worsen since the mid-1980s. IMF (International Monetary Fund) research shows the 2015 – 2016 El Niño is one of major drivers of economic performance in key countries like Zimbabwe, South Africa and Indonesia; with the first two countries experiencing serious drought and food crises while the latter struggles with forest fires. Serious flooding in the American Midwest and hurricanes are also signs of these escalating changes.

Other related research shows the impact extreme weather has on key short-term macroeconomic statistics in countries like the United States, where it creates or takes away 100,000 jobs in monthly employment. A World Bank report finds that water scarcity exacerbated by climate change, could cost some parts of the world up to 6% GDP, spur migration due to economic hardship, and spark conflict; in addition to this, a 2018 study of the economic cost of climate change among major world economies such as the US, UK & BRIC (Brazil, Russia, India & China) is estimated to a global cost of $417 per ton.

Agriculture: The WMO (World Meteorological Organization) says that the combined forces of a strong El Niño (a climatic change affecting the equatorial Pacific region and beyond, characterized by the appearance of unusually warm, nutrient-poor water off northern Peru and Ecuador, usually in December) and global warming in 2015 offers a glimpse on what’s to come at the present level of climate change in the system. If it progresses to the extent where the current El Niño impacts become the norm, it is more likely to grow, and become worse as time progresses if quick and decisive actions are not taken to cut emissions.

Global Sea Level Rise: Sea level has been rising over the past century at a more accelerated rate in recent decades. Two major causes are the glaciers and melting of the ice sheets which adds more water to the ocean, thereby causing an increased volume of the ocean as it expands due to the water getting warm. The third contributor, though small, but still impactful is a decline in water storage on land – aquifers, lakes & reservoirs mostly as a result of groundwater pumping, which shifted water from aquifers to the ocean. In 2017 the global mean sea level was 3 inches (77mm) above 1993 average – this accounts for the highest annual average in the satellite record from 1993 to date. Sea level has risen one-eighth of an inch (3.1mm) per year, this is due more in part to meltwater from glaciers, ice sheets and thermal expansion of seawater as it warms. 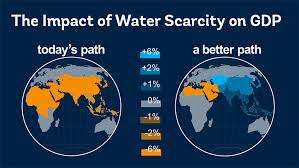 the impact of water scarcity on GDP by 2050, relative to a baseline scenario with no scarcity. source www.worldbank.org

The importance of sea level is of more concern today especially since a majority of the world’s population lives in relatively high population-density coastal areas, where sea level rise impacts flooding, shoreline erosion, and hazards from storms. U.N. Atlas of the Oceans shows 8 out of 10 largest cities are near a coast. At risk of sea level rise in coastal areas around the world are threats to infrastructures very important to local employment and regional industries such as: roads, bridges, subways, water supplies to name a few. The continuous sea rise introduces saltwater into the freshwater aquifers, which mostly sustain municipal and agricultural water supplies and natural ecosystems.

Health: One cannot argue that climate change can be positive or negative precisely, but the overall effects of global warming will result in less fewer deaths in winter due to temperate climates. It is currently observed that the continuous acceleration in temperature rise is linked to future emissions that drives climate change processes as well as increased food production in certain areas, but the overall long-term effects of a varying climate are very likely to be overwhelming and unpredictable; by affecting our health in terms of clean air, safe drinking water, insufficient food and secure shelter. Extreme heat contributes directly to deaths from cardiovascular and respiratory diseases which affects the most vulnerable people – elderly people, children, and developing countries with weak health infrastructures. The summer heat wave of 2003 in Europe for instance, deprived families in excess of 70000 deaths according to recorded data. Extreme heat weakens the ozone layer, raising the level of pollen and other aeroallergen triggering asthma that affects about 300 million people.

Cardinal principles that are simplest to abide by when it comes to climate change and waste management are the three R’s Reduce – Reuse – Recycle. Reduce: reducing what is produced and what is consumed is essential to waste management. Reuse: re-using or re-purposing for a use different than its intended purpose. Recycle: this means transforming into a raw material that can be molded into something new. To make our planet better, one of the things we can do as individuals is to prevent waste and conserve natural resources by using environmentally friendly materials. In order to clarify the rationale of a 1.50C limit on global warming, the recent IPCC report published on recommendation from the United Nations highlighted the consequences of inaction on climate policy, describing it as a phenomenon of unpredictable and dangerous outcome.

Response: A new work plan endorsed by WHO (World Health Organization) in 2015 on climate change and health proposed the following responses as a solution:

Morford, Stacy, et al. “Climate Change Will Cost U.S. More in Economic Damage Than Any Other Country But One.” InsideClimate News, 26 Sept. 2018, insideclimatenews.org/news/24092018/climate-change-economic-damage-america-social-cost-carbon-china-india-russia.

Amadeo, Kimberly. “What Has Climate Change Cost Us? What’s Being Done?” The Balance, 26 Sept. 2018, www.thebalance.com/economic-impact-of-climate-change-3305682.