Enjoy That Beer – While You Can! by City Tech Blogger Sean Denice

Agriculture is one of the most important aspects of our society. Most rely on it for food production. While others rely on it as a way life and a means of income. However, agriculture is also very susceptible to the side effects of climate change. Most crops need very specific conditions to grow and thrive. Since there is already scientific evidence that climate change is causing extreme heat and rain events around the globe, the chemistry that once made cultivation possible is getting harder to attain. The grains and grapes needed for alcohol production are not immune to the changing environment of Earth.

Alcohol has been a part of our society for a very long time. In fact, as long as there have been humans it is safe to say that there has been some version of alcohol. From beer to wine to hard liquor, man has always been looking for a way to imbibe. As long as there has been a motive to let loose, have fun, cope, forget, or simply enjoy an occasional drink, alcohol has been there to serve that purpose. Additionally, alcohol can be the center of many religious rituals, social and family gatherings, happy hours, sporting events, amongst others. However, due to the effects of climate change, we may see permanent changes regarding the production and consumption of libations. There is even a risk of eradication and extinction for some of these beverages that we take for granted. This study will focus only on beer, but it is important to note that wine is also suffering great deal. 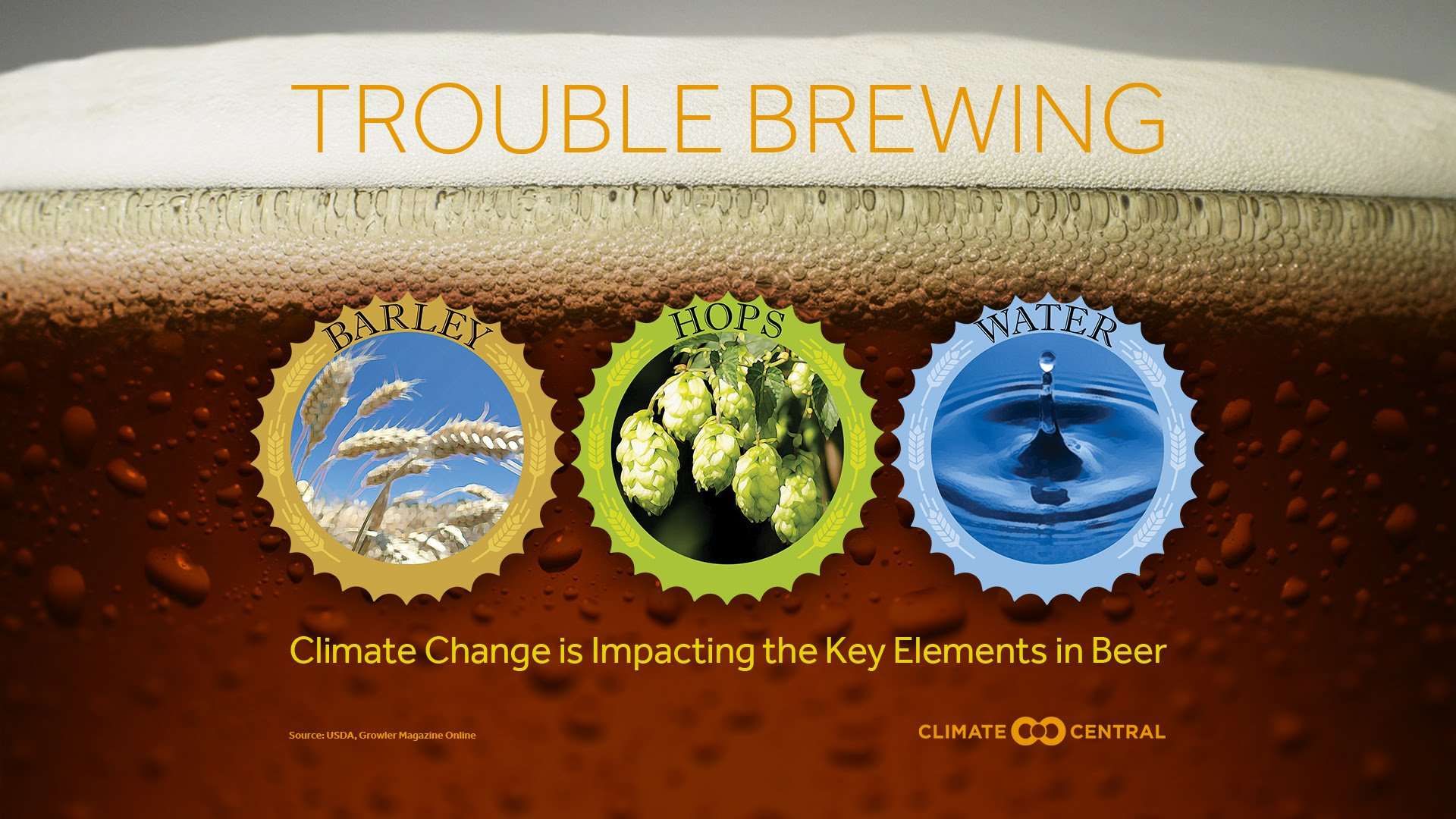 One of the most important ingredients for producing beer is barley, which needs the exact opposite conditions than those that are being imposed by climate change. Instead of warm and wet, barley needs a cool, dry place to flourish. According to the United States Department of Agriculture, “Barley grows well with supplemental irrigation in cool, dry areas. It can be grown in a hot climate, but is more susceptible to diseases and pathogens in a hot, humid climate. Barley crops are not typically grown in the humid regions of the southeastern United States.” As less suitable environments become available, barley will become scarce. With scarcity comes a bevy of implications.

The rationing of barley can be a norm in the future. In terms of percentages, barely used for beer production is minimal. Roughly only seventeen percent of what is grown will be used in the fermentation process of beer. The number one use of barley is for food. Some of it is used as an input for cereal production. While Brigit Katz of Smithsonian.com says “most of it goes into feeding livestock. But should barley supplies dwindle, higher proportions of the grain will likely be allocated to animals, thereby exacerbating beer shortages.” This means that beer production will no longer be a priority and barley will be reserved and allocated for sustenance reasons first. This will be the case even though raising livestock in and of itself is not the most sustainable of practices and greatly increases one’s ecological footprint. However, this is a topic for another climate change research project.

Hops will also follow a similar fate as barley. Notorious for adding the bitterness to beer, hops also need particular conditions to grow. And just like barley, their habitat is dwindling. However, hops do not have a saving grace like barley. Hops really serve no other purpose than their use in beer. They cannot be eaten and a call to save them may fall on deaf ears because of their limited applications. The beer fermentation process also requires copious amounts water. Water is perhaps the most important resource to human survival and is also suffering at the hands of climate change. Drought conditions and heat waves are become more prevalent and Dan Seitz of Uproxx stated “the planet approaching a water crisis is hardly news. By 2025, 1.8 billion people will experience an absolute water scarcity, and most of the rest will be under “water-stressed” conditions, and that will mean drastic shifts in the water we use and what we use it for.” Once again, this means that beer will take a back seat to humanitarian needs.

Because of the problems facing beer production we are very likely to see two things happen. One being, the cost of beer will skyrocket, and the other being that, when traditional recipes are no longer viable, we will see substitutes being used. The Washington Post reported that “the price of beer would double, and global consumption would decline by sixteen percent, or twenty-nine billion liters”. Smithsonian.com added “Spikes in beer costs will also fluctuate depending on the region, with wealthy, beer-loving countries experiencing the highest increases in price. In Ireland, a small country with a relatively high per capita beer consumption, prices could go up by as much as 338 percent per bottle. Residents would need to bring the equivalent of an extra $20 to cover the cost of a six-pack”. It is also crazy to think that the tried, tested, and perfected recipes of beer that go back thousands of years could go under an overhaul. As inputs become scarce or nonexistent we may see gains like Sorghum, oats, and millet become more prevalent over barley. Hops will give way to gruit, which is a mixture of herbs that will add the bitter and floral taste to beer. However, the one ingredient that cannot be replaced is water. This means that brewers will have to get creative and start recycling water from their brewing process. Stone Brewing in San Diego has already experimented with making beer from treated sewage water, called Full Circle. Some are even experimenting with greywater.

While beer is hardly a priority in the fight to combat and reverse climate change, it does serve as good measure of what we have done and where we are headed (if there aren’t enough already). Just imagine, crops and recipes, that have been cultivated and around for thousands of years can cease to be no more. We may longer be able to enjoy something that we’ve taken for granted. If anything, maybe this issue can be a motivating factor to get onboard with changing the way we live.