I believe many people now have realized that car pollution has become a worldwide public hazard. Car pollution, also known as automobile exhaust pollution is an environmental pollution caused by exhaust emissions from automobiles. Its contribution to the increment of greenhouse gas concentration cannot be ignored. The internal combustion engine of a car is actually a small chemical plant that consumes a lot of oil resources. Gasoline combustion produces driving force, but also produces many complicated chemical reactions during this process. These complicated chemical reactions emit a large amount of greenhouse gases and aggravate the greenhouse effect. The greenhouse gases such as carbon dioxide (CO2), sulfide (sulfur monoxide SO and sulfur dioxide SO2) , nitrogen oxides (nitric oxide NO and nitrogen dioxide NO2) and hydro chlorofluorocarbon (HCFC) from car emissions causes the greenhouse effect, destroys the ozone layer and acid rain becomes more serious.

Hydrogen energy refers to the chemical energy released by the chemical reaction between hydrogen and oxygen. It is a clean secondary energy source that has many advantages, such as high energy density, high calorific value, wide source, storable, renewable, electric flammable, zero pollution and zero carbon emission. Hydrogen energy helps solve problems such as energy crisis and environmental pollution. That’s why it is also known as the “ultimate energy” of the 21st century. According to the World Hydrogen Energy Association，by 2050, 20 percent of the reduction of carbon dioxide will come from the use of hydrogen. Hydrogen will create 30 million jobs, reduce CO2 emissions by 6 billion tons, and create more than $2.5 trillion in market value. Hydrogen cars will account for 20% to 25% of vehicles worldwide, and support more than 18% of energy needs by leading de-carbonization society.

As a small, Pacific island country with a lack of resources, the Japanese people’s national character has always been rooted in a deep sense of urgency. This is particularly evident in its response to growing energy and environmental issues. As early as 2009, the Japanese government encouraged the development of hydrogen energy vehicles. In 2014, the construction of the hydrogen energy society was determined as a national development strategy, and the infrastructure of the hydrogen energy society was planned to be realized in 2030.

The reason for this may be demonstrated by Toyota’s vision of developing hydrogen energy vehicles. In the eyes of Toyota, “Use less drop of oil, and eventually don’t use a drop of oil” is the final goal achievement of its research and development of hydrogen energy vehicles. The electric energy used in pure electric vehicles basically comes from thermal power generation. Therefore, electric vehicles cannot achieve real energy savings. But hydrogen fuel is different from other energy sources. It is clean and renewable.  With the popularity of hydrogen energy technology in the future, it can be used as a renewable resource for the daily use of cars. First, fuel cell vehicles are close to zero-emission vehicles. The product may have a small amount of carbon dioxide in addition to water. But its emissions are much less than that of the internal combustion engines. And there are no other pollution emissions (such as nitrogen oxides, sulfur oxides, hydrocarbons or particulates). Second, the hydrogen fuel used in fuel cells comes from a wide range of sources. Hydrolysis can be used to produce hydrogen, or it can be obtained from natural gas, propane, methanol, gasoline, diesel, coal and renewable sources. Fuel cell vehicles lower our dependence on oil resources, reducing greenhouse gas emissions due to vehicle exhaust. 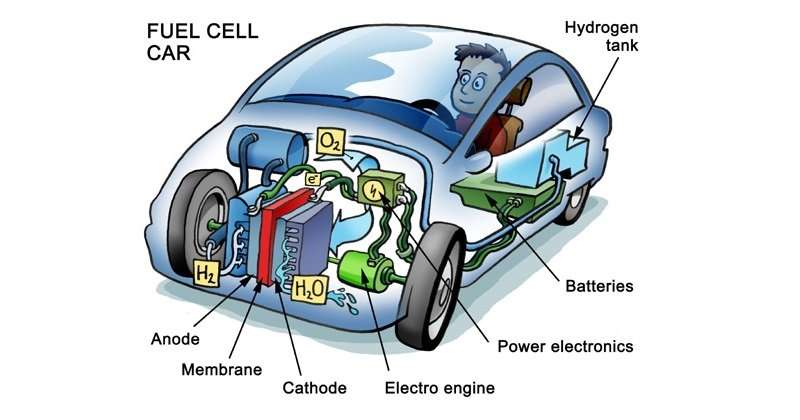 It is foreseeable that Japan’s use of hydrogen fuel cells is more than just a field of travel. Building a self-generating and high-power centralized power supply for hydrogen fuel is also in Japan’s energy development plan. If fuel cell technology gets a major breakthrough and gets popularized in many fields, then you only need to replenish hydrogen regularly to meet all your power needs. Once the hydrogen fuel becomes a very cheap and renewable resource, Japan can build a very strong renewable energy industry chain based on hydrogen fuel cell technology.This will completely change the energy pattern of pure consumption from a single long-term dependence on oil to diversification. It will also improve the development of new directions of reducing emission of greenhouse gases.

Although it sounds like a good prospect for the development of hydrogen fuel vehicles, the promotion process is still difficult. For example in Beijing, China, almost every person who buys a new energy car in Beijing will worry about where to charge. This problem is especially common on fuel cell vehicles. After all, the hydrogenation stations needed for fuel cell vehicles are very rare in today’s world (only 6 were built in China). For urban infrastructure, the relationship between hydrogen refueling stations and fuel cell vehicles is like the relationship between chicken and egg. Without sufficient vehicle sales, the government and businesses do not see the profit margin of investing in hydrogen refueling stations; on the other hand, without a convenient hydrogenation network to provide refilling services for hydrogen energy car, private car owners are hard pressed to make the decision to buy fuel cell cars.

Due to the fact that hydrogen itself is flammable and needs to be stored in a high pressure liquid state, the hydrogen storage tanks and pipelines used in the hydrogen refueling station must be constructed with high-priced materials. The cost of every unit is much higher than the super charging stations of Tesla. You can see it on Toyota’s hydrogen station map website that all hydrogen refueling stations in the United States are concentrated around the west coast of California. It is still impossible for a car owner to travel long distances between the East and West coasts to just refuel their car’s hydrogen energy. Refer to Tesla’s spurt sales growth after completing the charging network of the US mainline, it’s a long and difficult way to promote fuel cell vehicles into China or even worldwide. Hydrogen vehicles can significantly reduce greenhouse gas emissions, which we need to do in combatting climate change.