Climate change affects our whole planet, but some countries cause more damage to the Earth by emitting a lot of carbon dioxide into the atmosphere. The climate is changing and the activities that us humans do will lead to many more changes. Theses changes will affect sea levels, drought frequency in some places, and severe precipitation leading to floods.

In the Third U.S. National Climate Assessment (NCA3) it states the annual average temperature in the United States has increased by 1.8° F from 1901 to 2016 and over the next few decades the annual average of temperatures are expected to rise about 2.5° F. It also reports that the higher temperatures projected for the United States and the world are expected to increase the intensity and frequency of extreme events. The changes in the characteristics of extreme events are important for human safety, infrastructure, agriculture, water quality, and natural ecosystems.

In the United States there are signs of coastal flooding, which we are already affected by, with the global rise in sea level causing daily tidal flooding in more than 25 Atlantic and Gulf coast cities. This is because of the melting ice from the glaciers and changes in the ocean circulation. There also have been reports of heavy precipitation and increasing in intensity and frequency across the United States and also in other parts of the world. The heavy precipitation in the United States are observed in the Northeast and the Midwest. Heat waves have also been reported more frequently,  lasting for more than a few days to a week.  The intensity and frequency of hurricanes have been increasing in the Atlantic and in both the eastern and western North Pacific. 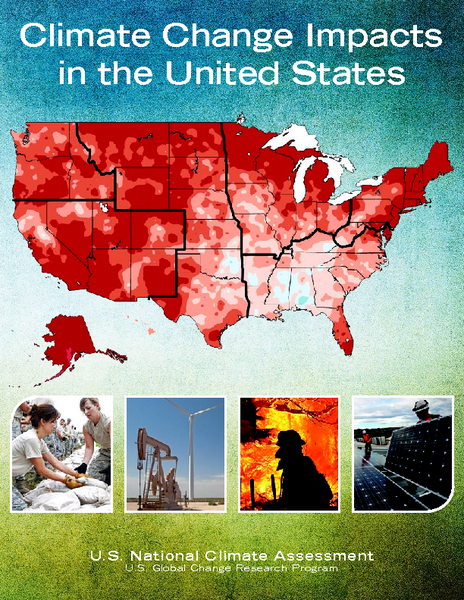 Climate change also affects the fresh water and marine water resources that can be contaminated and cause illnesses. The water-related illnesses include waterborne diseases caused by pathogens, such as bacteria, viruses, and protozoa. These water related toxins are produced by certain harmful algae and cyanobacteria, which also cause illnesses. Exposure to these illnesses can be through ingestion, inhalation, or direct contact. Water resource, a public health and environmental agency in the United States, provides many health safeguards to reduce the risk of exposure. They monitor the quality of the water, taking standard drinking water treatment practices, closings of beaches and public advisories for boiling drinking water.

Climate change can cause a variety of health risks due to the warmer temperatures that increases pollen production in plants, which makes it worse for people with asthma, allergies and other respiratory conditions. Climate change causes an area to be more tropical, which is prone for insects to survive, and insects that carry diseases such as mosquitoes and ticks make West Nile viruses, Lyme disease and other diseases more predominant. There are certain people that are more vulnerable to the impact of climate change. It can raise health risks for people with existing physical or mental illnesses, in children and older adults that work outdoors or even living along the coast that are prone to flooding.

I live in the east coast of the United States in New York, and I’ve witnessed the effect of our changing climate. Hurricane Sandy had hit us back in October of 2012 and that I would have never thought that a hurricane would ever hit New York. Hurricane Sandy had caused over $20 billion in damages and 43 deaths. The transportation facilities, including airports, trains, subways and highways were all effectively shut down. Many residents were trapped at home flooded with water and no electricity. There are experts who say that the storm hitting New York is a sign that the climate is changing, and we will be expecting similar storms in the near future.

Another observation of climate change that I’ve seen in New York is during the winter there would be less snow fall, but if we do get some it would be a heavy snow storm. I’ve also experienced several days of heat waves and experts state that New York experiences an average of 18 days a year with temperatures over 90° F. Experts predict we would experience up to 57 days a year of temperatures over 90° F by 2050. The sea levels along the New York coast has already risen more than a foot since 1900 and the rate it rises is about 1.2 inches per decade, which is twice the observed global rate of 0.7 inches per decade.

Soon the busiest borough of New York City, Manhattan, will be under water because it’s the lowest elevation in New York City. The levels of Lake Erie and Lake Ontario are expected to drop due to the evaporation and lower recharge rates caused by climate change. Lake Erie levels are expected to decrease by as much as five feet by 2100, which threatens the wildlife and reducing water supplies for electricity generation.  Climate change would impact the forest that we have in the Northern part of New York that have important tree species such as sugar maple and paper birch, but it will eventually be gone with the increased in temperatures and the changes in precipitation. The fish population will also decline in our fresh water rivers through out New York because of the low levels of dissolved oxygen, slow stream velocity, low depth if flow, high temperature, and high levels of turbidity. These all are causes that can happen with the increase in temperature, which also increases the chances of droughts.