Climate change is a change in the usual weather pattern over seasons, years or decades and of a certain place; lets say that place is New York.  Climate takes hundreds or even millions of years to change. Some of the long-term effects of global climate change are: temperature will continue to rise, more droughts and heat waves, hurricanes will become stronger and more intense, sea levels will rise. I would like to talk about the rising sea level. I live on East coast of U.S. and we definitely will feel the impact of sea level rise, which are caused by: warming waters that expand, gulf stream is slowing down, ice melting in glaciers, ice caps and ice sheets, sinking land.

The Gulf Stream is the powerful ocean current that moves water around the world’s oceans. It flows from the Gulf of Mexico along the Florida coast and up along the East coast of US, crossing Atlantic Ocean towards Ireland, the UK and Europe. It moves at average speed of 4 miles per hour. But now the Gulf Stream is slowing down. “The Gulf Stream pulls water away from shores of the east coast. When the Gulf Stream slows, less water is taken from East coast, leaving more water to pile up there. This causes the sea level to rise.”  The Gulf Stream will cause sea level rise in US only on the East coast. “It circulates ocean water from south to the north and back, like a conveyer belt.”  According to the laws of physics, cold salt water flows on the bottom and warm salt water on the top of the stream but melting ice from glaciers and Antarctica adds more fresh water. This fresh water has lighter weight, does not sink to the bottom fast enough like salt water, and it slows down the Gulf Stream. 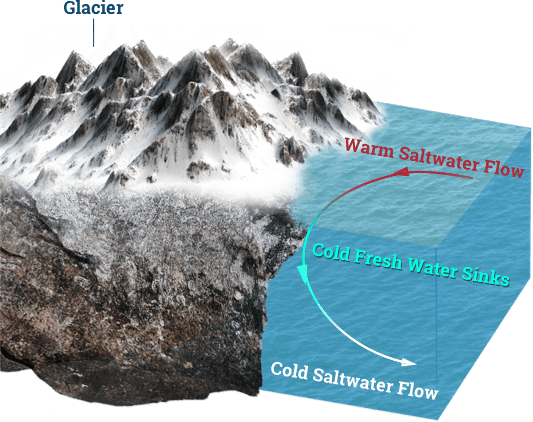 Glaciers are made up of fallen snow that, over many years, compresses into large thickened ice masses”. They are different in sizes and occupy about 10% of total land in the world. Scientists have found that since the early twentieth century, glaciers are retreating and some of them are shrinking so fast that they can disappear just in a few decades. Snow cover is melting. “NASA’s Ice, Cloud and Land Elevation Sattelite-2 (ICESat-2) successfully launched from California at 9:02 am EDT Saturday September 15, 2018”. This satellite mission is to measure the ice of the Earth. The polar ice caps contain the majority of Earth’s supply of fresh water. NASA satellite photographs show that the polar ice caps are shrinking 9% every ten years.

Sinking land causes sea level rise in some areas. The land beneath some towns in Virginia is actually sinking, moving the town downward closer to the sea.

In the last decade, the speed of  sea level rise has tripled on the coast of Florida. Around Miami the sea level has risen by 8” over the past 66 years, and it is expected to rise another 8” in next 20 years. City officials need scientific projections to help them to try to protect their land and people. Local communities have already calculated that they need billions of dollars for protection against sea level rise. Miami Beach is raising its roads by 2 feet at a cost of $2 million per block. Florida’s Broward County is upgrading sewage system to eliminate septic tanks with estimated budget over $250 million. Salt water can break tanks and cause sewage to spill out creating a smelly problem and health hazard.

Should the population of New York City be worried about sea level rising? Will it affect our city? In New York City the sea level has risen by 5.5” over the past 35 years, and scientists predict that the sea level will rise by another 5.5” in the next 14 years. Scientists forecast that water levels will rise faster, but are not sure just how fast. Sea level rise poses a significant risk to New York’s people and economy. The New York State Sea Level Rise Task Force in “its final report issued early in 2011… assessed sea level rise impact and identified the greatest threats to coastal communities and natural resources”.  Its recommendations are the basis for many of New York City’s current climate change policies.

With the scientific projections, officials can decide how houses should be built, where roads should be laid, and what must be done to protect against flooding from sea level rise. A lot of New York City places are less than 16 feet above sea level. Some points of lower Manhattan are 5 feet above sea level. Sea level rise could turn New York into Venice. By 2100, scientists project sea level rises by 8 feet. NYC is building $335 million flood wall in Manhattan. The risk of future flooding is changing the way that buildings are designed in the city. Top floor penthouses are gone and replaced with emergency generators that will not endangered by flooding. Special drainage systems are being built with materials that can tolerate flooding. Meanwhile, in Broad Channel Island of Queens street levels are being raised and in Breezy Point of Queens new houses are being built on raised platform. “It is time design for the worst and hope for the best”.

Year 2100 seems too far from now and probably that is why most people do not think about problems facing the population in the distant future. We are struggling with many problems in our life now that are here because of climate change, problems that will be faced by our  grandchildren who will not be happy with our generation.