I was born and raised in Vietnam. There, every year, I see news about the destruction that natural disasters have brought to people and the country. I also notice that the weather has become more intense every year and I am convinced that climate change must be responsible for that. Climate change is one of the greatest challenges for mankind in the 21st century and has been causing dramatic changes through extreme weather events. Abnormal weather patterns have given us rising temperatures, strong storms, heavy rain, floods, droughts and rising sea levels, Vietnam has been confronted with these increasing signs of climate change. Under the impact of climate change, natural disasters in Vietnam have brought us many floods which have badly affected economic development, the community and the environment, making no small obstacles to the sustainable development of the country. According to predictions about the impact of climate change, Vietnam is one of the countries that will be most severely affected in the next few decades.

From 1958 to 2007, the average temperature in Vietnam increased by 0.5-0.7 degrees Celsius annually. In 2007, average temperature in Hanoi, Ho Chi Minh City and Da Nang was 0.8-1.3 degrees higher than the average temperature of the years between 1931 to 1940 and it was 0.4-0.5 degrees Celsius greater than the early 1990s. In each location, the trend of change of the average rainfall in the country is inconsistent in different periods and regions. The annual rainfall decreases in the northern areas and increases in the southern areas of Vietnam. On average, rainfall in the past 50 years has decreased by about 2%. However, rainfall variability tends to be extreme, which increases during the rainy season and sharply decreases in the dry season. Due to the impact of climate change, in the past five to six decades, tropical cyclone activity in the South China Sea has increased at a rate of 0.4 cycles per decade; the tropical cyclone fluctuates in Vietnam at a rate of 0.2 cycles per decade and has a stronger intensity. The orbit of the typhoon signaled a gradual shift towards the south causing storm season to last longer. Typically, typhoons have irregular and unconventional paths. Another disturbing sign of climate change is sea level rise that is causing widespread flooding, salinization of water resources, major impacts on agricultural production, risks to industry and future socio-economic system. Observation data at coastal stations in Vietnam show that the average sea level rise is 3mm per year, equivalent to the average increase in the world. 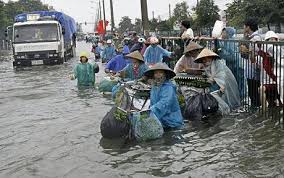 In 2016 and early 2017, irregularities of the weather were increasingly intense, occurring throughout the country. Specifically, with the dry season in 2016, many places in the South and the Central of Vietnam experienced drought due to the deficiency of rainfall up to 30 to 40 percent, leading to salinity intrusion at the rivers of Central Vietnam and the Mekong Delta to arrive earlier than usual. Farmers were very disturbed by salinity. They suffered from the lack of fresh water for their daily activities and productions. Nonetheless, In the Central regions, flood season come late but it was very heavy. The floods rampaged for many days in the last months of 2016, causing great damage to the property and people. In the North, the winter arrived early, but locals did not experience the cold air of the winter, due to having many days of suddenly high temperature in the between the cold winter days.

Climate change is having strong impacts as the recent, extreme natural events are recognized for far exceeding previous records. According to the World Meteorological Organization, 2016 broke the record of 2015, becoming the hottest year in the history. Carbon dioxide levels in the atmosphere continue to rise, exceeds the hazard threshold. Climate change is predicted to cause many complicated developments in the coming years and will continue to create many socio-economic, security and environmental challenges. In particular, Vietnam is considered one of the countries that is heavily affected by climate change due to the long coastline. According to climate change scenarios for Vietnam, by the end of the 21st century, about 40 percent of the Mekong River Delta, 11 percent of the Red River Delta and 3 percent of the local coastal areas will be submerged in water. At that point, 10 to 12 percent of Vietnam’s population will be directly affected with a loss of about 10 percent of national GDP. Ho Chi Minh City will be inundated over 20 percent of the city area.

Climate change is the most serious challenge for sustainable development for all countries in the world, from developed countries to developing countries. Without effective response to climate change, socio-economic development will suffer, sustainable development will be difficult, even impossible. In the process of climate change, humans and ecosystems in general may be able to adapt themselves gradually, but some species, if unable, will gradually disappear, leading to extinction. The danger pose by this negative change is that they can only be seen after a sufficiently long period of time. If we don’t act early, the consequences will be very heavy and difficult to recover. The strategy for adapting to this change is the need to develop long-term plans that are integrated into development options.

The American West, especially California, has always been subject to droughts, fires, and floods. But human-induced climate heating tipped the Western weather system into overdrive. 2020 was an exceptional year for drought, wildfires, and floods. 2021 was even more exceptional. Lake Mead, the nation’s largest reservoir, lying between

What is Climate Change According to NASA (National Aeronautics and Space Administration), It’s when we release carbon like burning coal or using gas-powered cars causes the greenhouse effect, which causes our atmosphere to have a higher concentration of CO2. Wind Power Impacting Climate Change Like solar and nuclear,