As we can see today, the planet is warming, and the earth is suffering. Climate change has already had observable effects on the environment and the daily life of humans.  These impacts extend well beyond just an increase in temperature. There are many impacts of climate change on our natural environments, plants and animals, leading to acceleration in biodiversity loss in some areas. These areas are changing and vanishing right now: glaciers have shrunk, ice on rivers and lakes is breaking up earlier, plant and animal ranges have shifted, and trees are flowering sooner. Climate change is also causing sea level rise and longer, more intense heat waves. The impacts can get worse over time; climate change may also aggravate erosion and cause the decline in organic matter, salinization, soil biodiversity loss, landslides, desertification and flooding. The result: climate change is the greatest environmental threat humanity has ever faced and the biggest challenge our generation has ever seen.

As in other parts of the world, my home country, China, has experienced noticeable changes in climate over the past 100 years and it becomes one of the most vulnerable countries to the adverse impacts of climate change. In fact, China already emits more carbon from burning fossil fuels than the United States and Europe combined as we saw electricity use jump in the past as its economy accelerated. The use of oil is growing as China has become the world’s largest car market, and so has natural gas consumption. The economy is growing but climate change is affecting the environment of China at the same time. According to the resources, the impacts of climate change have been felt in cities and the countryside alike in China. The study points out that river flooding in China caused by climate change affects their economy and environment. In general, flooding in the superpowers won’t just hurt local manufacturers but the whole global network of trade and supply chains. But look at the statistics: the economists calculate losses passing $380 billion in the next 20 years because of economic losses from river flooding caused by climate change. According to the resources, it also hurts worldwide economics because China is the largest maker and buyer in the world by far. If humanity will not stop the development of climate change in the future, the cost due to river flooding will increase by more than 15 percent to more than $600 billion within the next 20 years while flooding will directly impact Chinese people’s life.  130 Chinese cities have suffered flooding every year. A rising incidence of urban flooding is linked to localized increases in precipitation caused by climate change. Chinese people might die or suffer injuries during urban flooding. For example, a massive flood along the Yangzi river killed thousands of people. 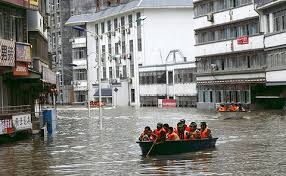 The risks of flooding are particularly apparent as the wave of urbanization moves inland from the coastal cities. (A flooded street in Drugchu County, Tibet – Image by Aly Song) . https://www.chinadialogue.net/article/show/single/en/6420-Chinese-cities-will-take-a-decade-to-catch-up-on-flood-risk

The impact of climate change not just affects the increase of Fluvial flooding, it also makes many parts of China more dry and droughts are likely to pack more punch as the climate warms further. In any particular year, there is typically a region in China that endures a precipitation deficit and experiences drought, leading to large societal and economic losses. Because of the large area of China, the Chinese climate is very complex and varies substantially from region to region. But the Northwest of China and the Mideast of China has suffered from several prolonging severe drought disasters. For example, Guizhou is a city in Mideast of China already suffers by the effects of climate change, including droughts. In fact, climate change-driven drought and warming drive down production of rice, wheat, and corn in Guizhou`s farmland. The farmland is drought because of the rising temperatures reduce the growth period of grains, leading to average reductions in yields. It may destroy the business of farmer in Guizhou and the using of water is lack while frequent seasonal drought places stress on the water supplies available for irrigation. For another example, climate change-driven drought and warming also affect on Yangtze river which is one of bigger river in China. According to the repursues, the global warming could increasingly disrupt the effect of air flows, rains and waterways that feeds dams and farming heartlands. These results can cause the months-long dry spell across parts of central and eastern China. According to the study sponsored by China’s meteorological administration: “Droughts in dry seasons and floods in wet seasons are more likely on the Yangtze above the Three Gorges, with increased torrential downpours and other extreme weather events that will have negative consequences for managing the dam. You could have a situation where average precipitation volume doesn’t show a big change, but extremes of lows and highs, of major floods and droughts, could increase.” The thought of statement points out the danger of floods and droughts might cause more and more dangerous, it will may Chinese people think of a severe drought such as this could be followed by severe flooding, which is what happened in 1998. 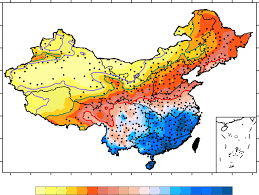