We need to mitigate the negative impacts and adapt to global warming to avoid massive costs from rising sea levels. Oceans are rising and this is for two main reasons. First, and perhaps most obvious: ice is melting. There is a large amount of isolated ice in Greenland, Antarctica, as well as glaciers. As the climate warms up, that ice melts and water flows into the oceans. The other reason why water is expanding onto land areas is because warm water is less dense and widening. This expansion causes the water surface to grow. Rising levels of the oceans is a big problem. About 150 million people live within 1 meter above high tide sea level. About 600 million live within 10 meters above sea level. As the waters grow, these people will have to go somewhere. It is inevitable that climate refugees will need to move homes and jobs due to rising waters. In some places, people will be able to build sea walls to block the rise of water. But in many countries, this will not be possible. For example, Miami has a porous base rock that allows seawater to traverse through the soil. A recent study  has been published that considered this issue. Authors analyzed sea level costs if we were successful  in limiting the earth’s temperature rise to 1.5 ° C or 2 ° C. They also considered the future cost using “business as usual” scenarios. What the authors found was interesting. If people act to limit warming to 1.5 ° C, they estimate that the sea level will increase by 52 cm by 2100. If people keep global warming at 2 ° C, sea levels will probably rise to 63 cm until the 2100s. The difference (11 cm) can cost $ 1.4 a year if no other social adaptation has been made. This is a shocking number and this should motivate us to act. In the study, the authors considered which countries and regions would suffer the most. What turns out is that high-income countries will be worse, especially China. High-income countries have a slightly better prognosis due to current flood protection standards. There are four important things from this study. First, while the economic costs are great, there are a number of forecasts. Actual costs may be lower or higher than the average predicted in the study. This is mainly due to the fact that we do not know how quickly Greenland and Antarctica will melt. If they melt faster than thought, the consequences will be worse than those thought. Second, adaptation will help. By adaptation we mean the steps that have to be taken so our societies are less susceptible to sea level rise. For example, building sea walls when possible, building new infrastructure off the coast, putting natural breaks to limit the storm rise during the major storms and making the infrastructure more sustainable to water. Third, what we do now matters. If we can lower the high emissions “business as usual” scenarios, if we can increase our investments in clean and renewable energy, we can reduce future costs. Finally, while scientists often use 2100 as a base year, it is not that the oceans will stop growing then. In fact, we are engaging in hundreds of years of rising oceans. Ocean has a lot of climate inertia. As soon as it starts to grow, you cannot stop it. So, focusing only on 2100, we are deceiving ourselves by underestimating the long-term costs. 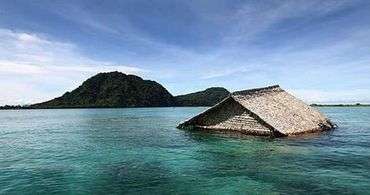 The water has risen only a few inches, but it is apparently too much. At least five uninhabited islands in the South Sea island state of the Solomon Islands are irretrievably lost in the sea. Australian researchers led by Simon Albert of the University of Queensland cite a combination of natural erosion and sea level rise (Environmental Research Letters).

Nearly 1000 islands are part of the Solomon Islands. Using aerial photographs and satellite images from the years 1947 to 2014, the scientists investigated the development of 33 islands. Three of the islands disappeared in 2002, another disappeared in 2011, and the last one, Kale, apparently did not set until 2011 and 2014 – it can still be seen on the satellite image of Google Maps. Six more islands lost since 1947 more than a fifth of their area. In contrast, a group of protected islands remained unscathed. Coastal erosion of Pacific Islands is not a new phenomenon. But the sea level, which has increased by up to 15 centimeters in the region due to changes in wind patterns since 1994, has apparently exacerbated the situation: From remains of old trees, the researchers conclude that the coastline of the affected islands was almost stable in the centuries before. But it has been discovered that parts of the land on six other islands have been transformed into the sea, thus destroying entire villages. Researchers say this is the first scientific confirmation of the impacts that climate change has on the coastline in the Pacific. The study, published in “Environmental Research Letters”, has watched 33 islands through satellite and aerial photography from 1947 to 2014, combined with profound historical meaning and local knowledge. The study found that the archipelago has seen rising sea levels of up to 10mm each year in the two past decades. The team of researchers investigated the effects of sea level rise on the area. They found that even large islands have completely disappeared. Fortunately, the main island got off lightly: the main island of Pohnpei is protected from erosion by its mangrove forest. Less well, it has hit the historically significant island of Nahlapenlohd. Researcher Nunn illustrates the fatality of the effects of climate change and rising sea levels with an anecdote: “There was a famous island called Nahlapenlohd,” Nunn wrote in Kaselehlie Press in Micronesia. “This island was so big that in 1850 it was the scene of a battle. Some stories are reminiscent of fighters hiding behind coconut palms to protect themselves from musket bullets. But today there is not a trace of Nahlapenlohd, not even a pile of sand marking where this island once was. How can it be that such a large, fortified landing strip completely disappears?