This essay is inspired by the flood in Guangdong Province at the end of August, 2018

I feel that there is more extreme weather in Guangzhou in recent years. It doesn’t rain for a long periods, or once it begins raining, it will be really heavy rain and lasting for a few days. Such a continuous rainstorm occurred a month ago in the southern Guangzhou, the kind of rainstorm that was very rare in the past. This may be related to the current global environment. Over the years, the El Niño phenomenon has caused extreme weather around the world. Maybe Guangzhou is also affected by the El Niño phenomenon.

China’s climate is indeed changing. From 1951 to 2009, China’s annual average temperature has risen by about 1.4 degrees Celsius. The rise in temperature has led to major changes in regional precipitation. The annual precipitation in the north is decreasing while the precipitation in the middle and lower reaches of the Yangtze River in the south is increasing year by year. Therefore, a “southern flood and northern drought” phenomenon happens; that is, the flooding in the southern regions and the northern cities suffering drought and the shortage of water resources.

China not only needs to solve water and soil pollution, soil erosion, land degradation and loss of ecosystems and habitats, it also needs to use only 9% of the world’s cultivated land and 6% of renewable water resources to feed one-seventh of the world’s population. Unbalanced development, urbanization, urban and rural population mobility and industrial development have indeed improved the living standards of some people. But it has also brought some problems that have made other people’s lives more difficult. For example, unbalanced development, urbanization and industrial development have increased the polarization between cities and some of these policies may affect the environment. Urban and rural population mobility may cause population to move to urban centers, leaving less people living in more rural areas and in city outskirts. Decreased population in the outskirts will reduce the number of farmers. And urbanization highly increases the possibility of government occupation of agricultural land or even nature conservation wetland.

The government realizes the pattern of climate impact is not static. For example, in my home town Guangzhou, Guangdong Province, due to rapid urbanization and coastal low-lying areas environment, the impact of weather disasters on residents of the area is increasing such as the  frequent and intensifying tropical cyclones and storm surges. Local government must take action to protect the growing number of people and the infrastructure they depend on for their livelihood.

Guangdong Province is working hard to repair the 650-hectare Qi-Ao Mangrove Nature Reserve. The Pearl River Delta brings several metropolises together. However, ecological degradation and pollution have destroyed the ability of coastal ecosystems in the region to buffer typhoons and tides. The importance of mangroves in reducing disaster risks and assisting climate adaptation is receiving increased attention. In 2008, Guangdong Province was hit seriously by the typhoon “Hagueby”. Compared to healthy ecosystems, the abilities of man-made infrastructure are dwarfed. The typhoon caused great damage to Zhuhai City (next to Guangzhou) where one third of the granite seawall was destroyed, but the nearby Qi Ao Mangrove Nature Reserve was unaffected.

Although the city government has begun to consciously pay attention to save the natural ecosystems in order to mitigate the damage from natural disasters, they haven’t done much yet. Therefore, once another natural disaster happens, we will still suffer. And we all know that natural disasters are unpredictable.

Since the end of August, Chaoshan area in Guangdong Province suffered a torrential rain in 50 years, resulting in varying degrees of guilt. Take Shantou City as an example, as of 11 pm on September 2nd, the affected area of the city’s crops was 217,500 mu, the affected population is 936,500, transfer of population of 117,200, direct economic loss of 2.762 billion yuan(among them, the loss caused by water directly was 140 million yuan.) The situation of facing this disaster is very serious. As of September 3rd, the number of people involved in disaster relief in the disaster area of Shantou has risen from 75,000 a day ago to more than 100,000. Specifically, there are 6 districts and counties in the city, 55 towns (streets) affected by the disaster, only Chenghai District is the exception. 75 houses collapsed, among them, there are 38 in Chaoyang District, 17 in Jinping District, 14 in Chaonan District, 5 in Qianjiang District and 1 in Nan’ao County. The most seriously affected are Chaoyang District and Chaonan District. The former has 13 towns (streets) affected by the disaster. The area affected by crops is 103,300 mu, the affected population is 394,700, the transfer population is 59,000, and the direct economic loss is 777 million yuan (water loss 119 million yuan). In the latter, there were 10 towns and towns affected by the disaster. The affected area was 81,300 mu, (he mu has been defined by customs treaty as 920.417 square yards) and the affected population was 507,300, the transfer population was 56,300, and the direct economic loss was 1.89 billion yuan (water loss was 15 million yuan). 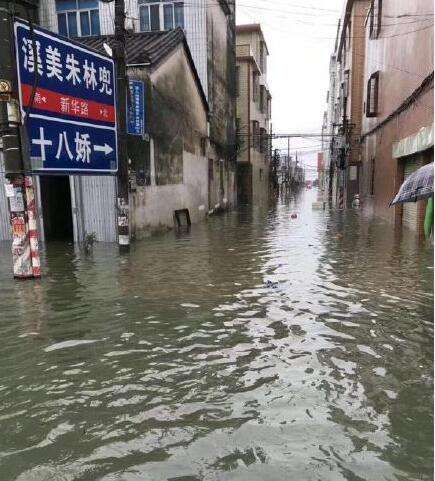 Not only that, the typhoon “Cuckoo” in 2003, the “Pearl” and “Bilis” in 2006, the heavy rains in 2007 and 2008, and the “Tiantu” in 2013, all caused a large floods in Shantou. I think the cause of this phenomenon has a lot to do with climate change in China. Of course, this is also related to the low terrain of Shantou itself and its geographical location. But its own geographical location has not changed and the previous disaster situation of Shantou was not as serious as nowadays. That is why I believe severe flood conditions have a high relative relationship with changes in the environment and climate. I hope the government can put more effort into solving this situation. Based on the reality, nobody can predicate when the next typhoon or torrential rain will be. This disaster situation makes people feel imminent. I know it is almost impossible to lessen the impact of climate change, but at least the government should do something to be better prepare for the next intense weather event and try to minimize the loss in these floods.