The definition for Sea Level Rise is when the amount of water in different areas of the world increases to a level that is concerning. Sea level rise is one of countless consequences of climate change.  Climate change is defined as a change in regional or global climate patterns.  Some of the consequences of climate change are heat waves, droughts, change in precipitation patterns, severe weather, and the extinction of different species due to changes in their habitat’s weather. In addition, the increase in global temperature causes seawater to expand and occupy a larger space which also causes the water level to rise.  Furthermore, the increase of global temperature makes polar ice melt which causes the water level to rise.

This is going to cause different types of problems for humans in the near future. One of them is the contamination of our drinking water (especially in cities that are close to the ocean).  The sea level is increasing at a high rate and soon it will reach near the shore and this will cause the rising sea to flow into the freshwater sources that are located near the ocean. As a result, this will affect different coastal areas since the rising sea will contaminate their drinking water with salt water.  In fact, saltwater is unsafe to drink, and purifying treatment is expensive as well as complicated.  Although some communities are already investing in these types of treatments, such as San Diego in California where they’ve already started to build one of the largest seawater desalination plants.  This project is estimated to cost up to 1 billion dollars but some communities might not to have the sufficient resources to cover an expense like this and would be left with no choice but to drink the contaminated water.

Another way sea level rise is causing problems for humans is in the agricultural sector and wildlife habitat for animal and plants. In many cases, the same water used for drinking is also used for farming, and if flooding occurs, aquifers can become contaminated and in turn can contaminate edible plants and taint the water that animals drink. If the food that we eat gets contaminated it could  lead to illnesses and other diseases.  Also, it will affect the public parks since parks rely heavily on water for their growth.  Likewise, sea level rise will affect the habitats of different plants and animals that live in the ocean an along the shore.

Along coastal areas, plants are very sensitive to their environment such as air temperature, access to water, and other chemical features, sea levels will be raised to a point that it will affect the soil where the plants are located, and it will become saltier.  Therefore, plants will not be able to cope with the modification of the soil and they will not be able to thrive.  In the same way as the coastal plant life is affected, the wildlife population is also affected, since many forms of animals like shorebirds and sea turtles make their home near the bays and beaches.  Lastly, this would harm the economy in different areas near the shore.  For example, the tourism and real-state industries located in coastal areas are likely to be hit by rising water and recreational areas might be washed away as well due to rise of sea level. 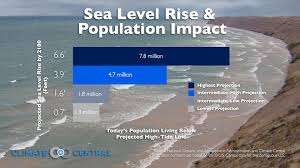 After doing my research on sea level rise, I’ve come to realize that it is a critical issue and the US government should do more to fight climate change and one way is for the current US administration to rejoin the Paris Climate Agreement.  This agreement is important because it set boundaries for most countries worldwide to limit harmful emissions in order to stave off the worst impacts of climate change.  In fact, the US is one of the countries along with China that produces 40% of the world’s emissions.

One personal experience I’ve had with sea level rise was on a trip to Venice, Italy.  When I was on the Gondola, I noticed the sea level was above the steps of a staircase from the river.  The water was supposed to be below the staircase.  This is the moment when I realized the effects of sea level rise is happening in a worldwide level.  If sea level rise is not addressed, cities likes Venice could disappear. Another personal experience is when Hurricane Sandy hit New York City in 2012. I was living here in New York during that time and I was not aware that the intensity of the hurricane was, in part, due to the consequences of climate change.  Sea level rise contributes to heavy floods, hurricanes, typhoons. Warmer oceans and the increase in temperature will give more energy to  hurricanes such as Sandy or the more recent Hurricane Florence and become more destructive.

However, there are different ways that sea level rise is being addressed.  Several cities are investing a significant amount of time and money to creating barriers such as large dams, gates or locks that would manage tidal flow in and out.  Barriers would be installed and placed near a sea bay and allow the sea to be controlled.  Different cities around the world are already using it such as the Maeslant barrier in the Netherlands and the Thames Barrier in London. But building these barriers are very expensive and could be a potential challenge for different cities worldwide. In addition, melting of ice from the Antarctic makes the water level to rise.  In conclusion, this issue is critical, and the world is already witnessing the consequences such as heavy hurricanes and the increase of sea level. Effective governments should comprehend that the time to fight climate change is now and everyone’s input is necessary in order to avoid the growing negative impacts from climate change in the near future.