Like most of Nature, the Atlantic Meridional Overturning Circulation (AMOC) is complicated.  Scientists are learning more about it, thanks to satellites, vessel-borne measurements, and high-tech buoys, but they don’t have a long historical record. They’ve determined that the AMOC is slowing down, sparking worry that climate change is to blame and raising concerns that it might collapse, ushering in a new ice age. Now, however, as Hannah Hickey- reports in her article  “Climate change isn’t to blame for slower Atlantic circulation,” about the AMOC, scientists from the University of Washington, the National Science Foundation, and several Chinese universities, labs, and institutes, have found evidence, published in the journal Nature, that climate is not the main reason for the current’s slowdown. Rather, they now believe, the AMOC is probably a natural periodic cycle that lasts 60-70 years. If the observed slowing is natural, it will eventually reverse. Thus we probably don’t have to worry about an ice age, but a slower AMOC will mean that less warm salty water will be stored deep in the ocean, so the water at or near the surface will be warmer, which is bad news for corals and other marine life. Tropical fish will seek cooler waters to the North, encroaching on Arctic species. It is also bad news for us humans, because our climate will continue to warm, even faster than it has been over recent decades. Warmer surface water also suggests that hurricanes and tropical storms, which feed off of warm water, will get stronger, wetter, and more frequent. Board up and batten down, Florida and the Gulf Coast. 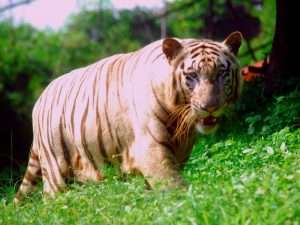