For eons humans have relied on artists, writers, poets, performers and philosophers to interpret the world, enabling us to marvel at or make sense of our mysterious universe. Throughout history every culture on this planet has sought answers to the unexplainable, the miraculous, finding creative decoding of what’s around us more palatable and mentally stimulating. The great 19th century artists of the Hudson River School were known for painting beautiful landscapes not only to record but to affirm that preserving our green spaces was paramount.

Nature has always been a source of inspiration but today’s artists are stirred by science as well. They create climate change-themed work that offers us an aesthetic of implicit urgency. An exhibit based on climate change is currently at the Storm King Art Center, a sprawling 500-acre outdoor sculpture museum in New York’s Hudson Valley. The show, Indicators: Artists on Climate Change, features over a dozen artists.

“It’s great that Storm King is doing this because they are intricately connected to the environment,” says Justin Brice Guariglia, one of the artists in the show. One of Guariglia’s pieces is an outdoor solar-powered LED traffic sign, Ecologisms (Highway Sign 1.0). It is located in an open grass field and the sign cycles through words derived from a collaboration between Guariglia and eco-philosopher Timothy Morton;  they include “We are the Asteroid,” “Danger: Anthropo Centrism,” and “Warning: Hurricane  Human,” among others. The initial effect is one of displacement because traffic signs quickly warn of roadway dangers to passing drivers, but here in a pastoral setting where we are standing still, these words summon a stark sense of vulnerability and great universal peril. “I wanted this work to be a bit humorous and quirky, but also rather poignant,” Guariglia explains, 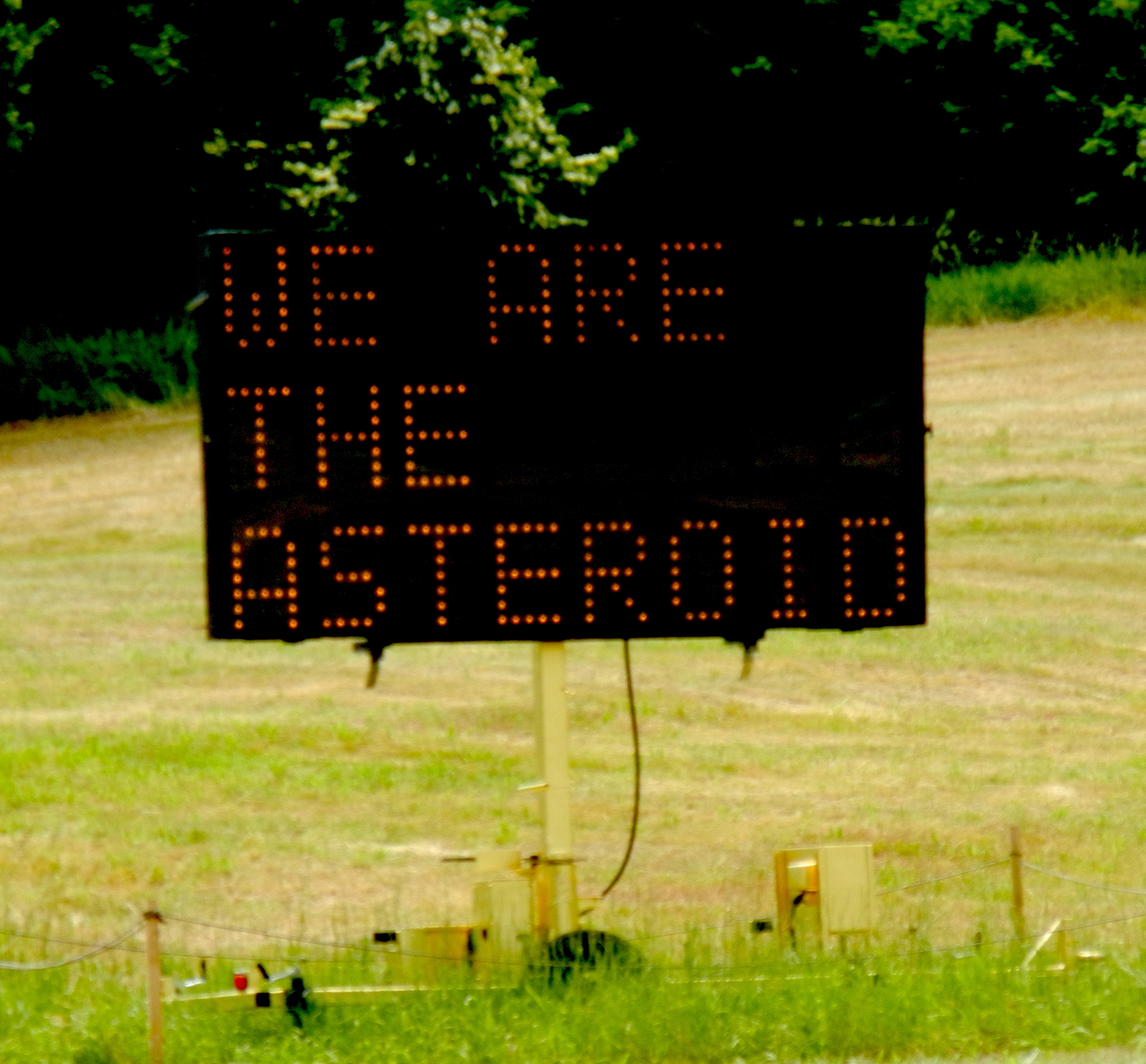 Four artists make up the group DEAR CLIMATE: Marina Zurkow, Una Chaudhuri, Fritz Ertl, and Oliver Kellhammer.  Their installation is a circle of twenty banners redolent of the encircled flags at the United Nations. The few black banners stand out among the white ones and speak to those who are reluctant to accept climate change and its consequences: “Give Me Luxury or Give Me Breath,” or “Let Them Eat CO2.” The white banners answer these charges with positive messages: “See – Sea Levels” or “Grieve the Grid.” 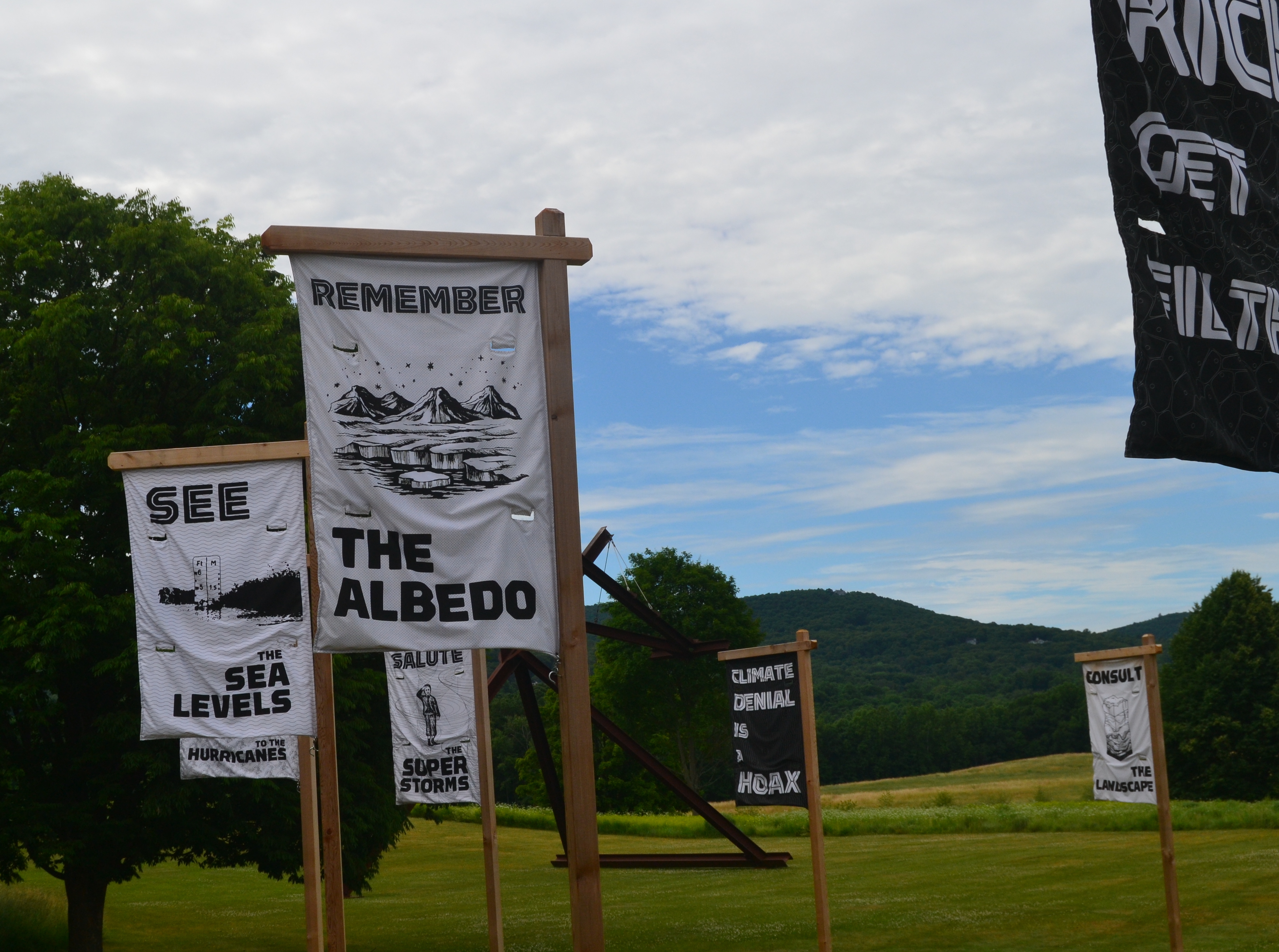 Circles are a popular form in this show. Hara Woltz’s “Vital Signs” links weather and climate change by incorporating an actual weather station that towers over a circle of different size cylindrical forms. The flat tops of the cylinders are white, each with varying sizes of blue circles; Woltz says these represent the Arctic sea ice melt, the related sea level rise and the heat absorptive properties of sea water. At the touch, these circles differ in temperature, the bigger blue circles are hotter than the smaller ones. The small weather station is constantly gathering real-time climate data which can be viewed here.  Visually elegant, Woltz’s piece is accessible, interactive, and conveys the hard truth of our interference with the planet’s climate. 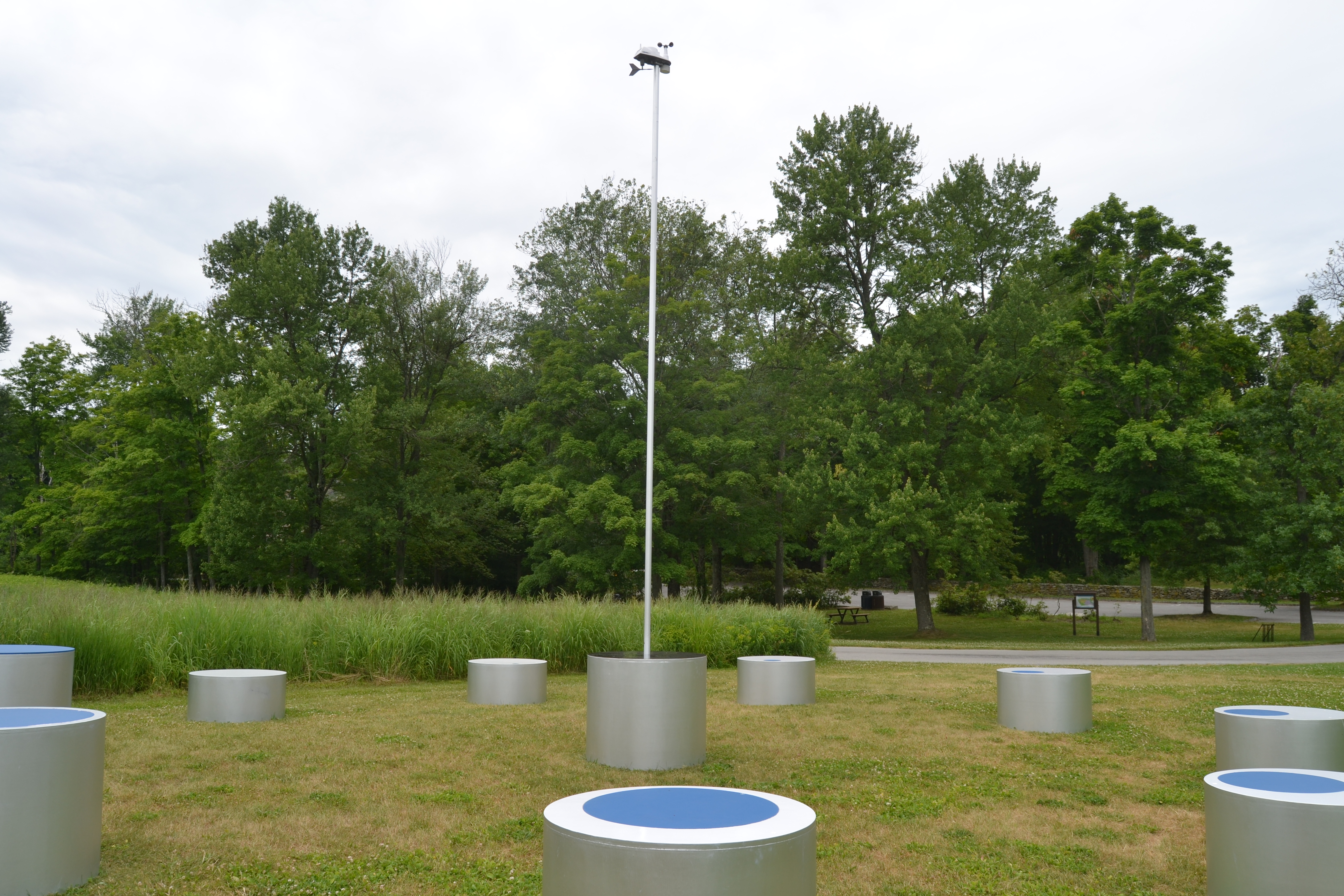 Less literary is a work by Maya Lin entitled “The Secret Life of Grasses” which is three ten-foot tubular vessels where a single stalk of prairie grass grows through porous soil allowing the viewer to see the plant from root to tip. Lin thus shows the carbon absorption of a plant’s lengthy root system. Perched upright in their enclosures, the roots are taller than we are and the more subtle message is that forces of nature are sometimes hidden from our sight. That can work both ways: think greenhouse gases. 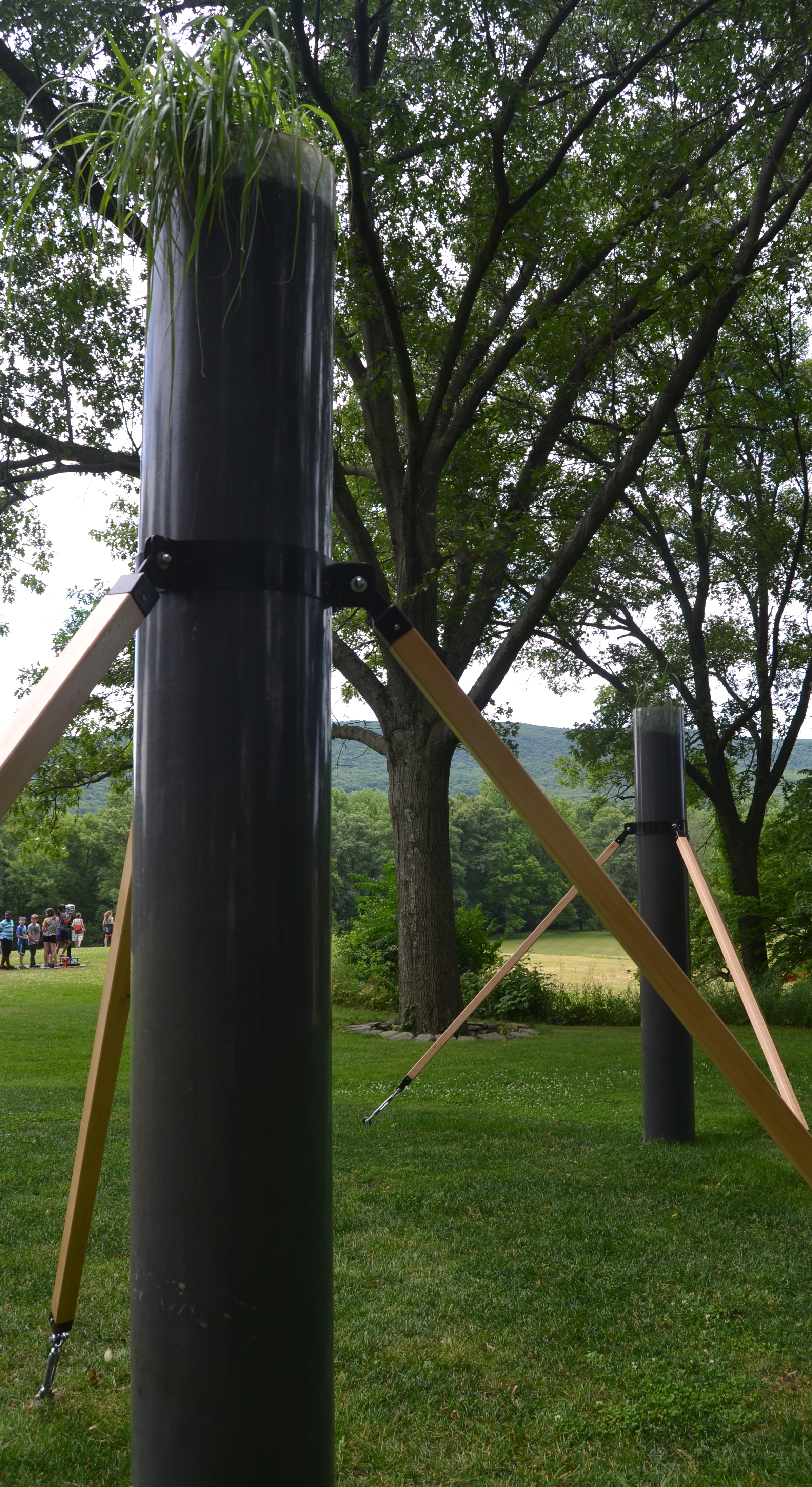 DAVID BROOKS’ work Permanent Field Observations indulges the viewer on a treasure hunt of sorts. Brooks collected objects from the Storm King forests (rotting tree stumps, tangles of roots, acorns, chunks of wood) and cast them in bronze, artifacts that he then placed near where he originally found them. A map guides us to the general area of these bronze pieces – some are hard to find. The search has us asking, “What is real and what is an artifact?” and induces a perception change. Brooks’work “reveals the frustration involved in looking for something difficult to apprehend, like climate change itself.” 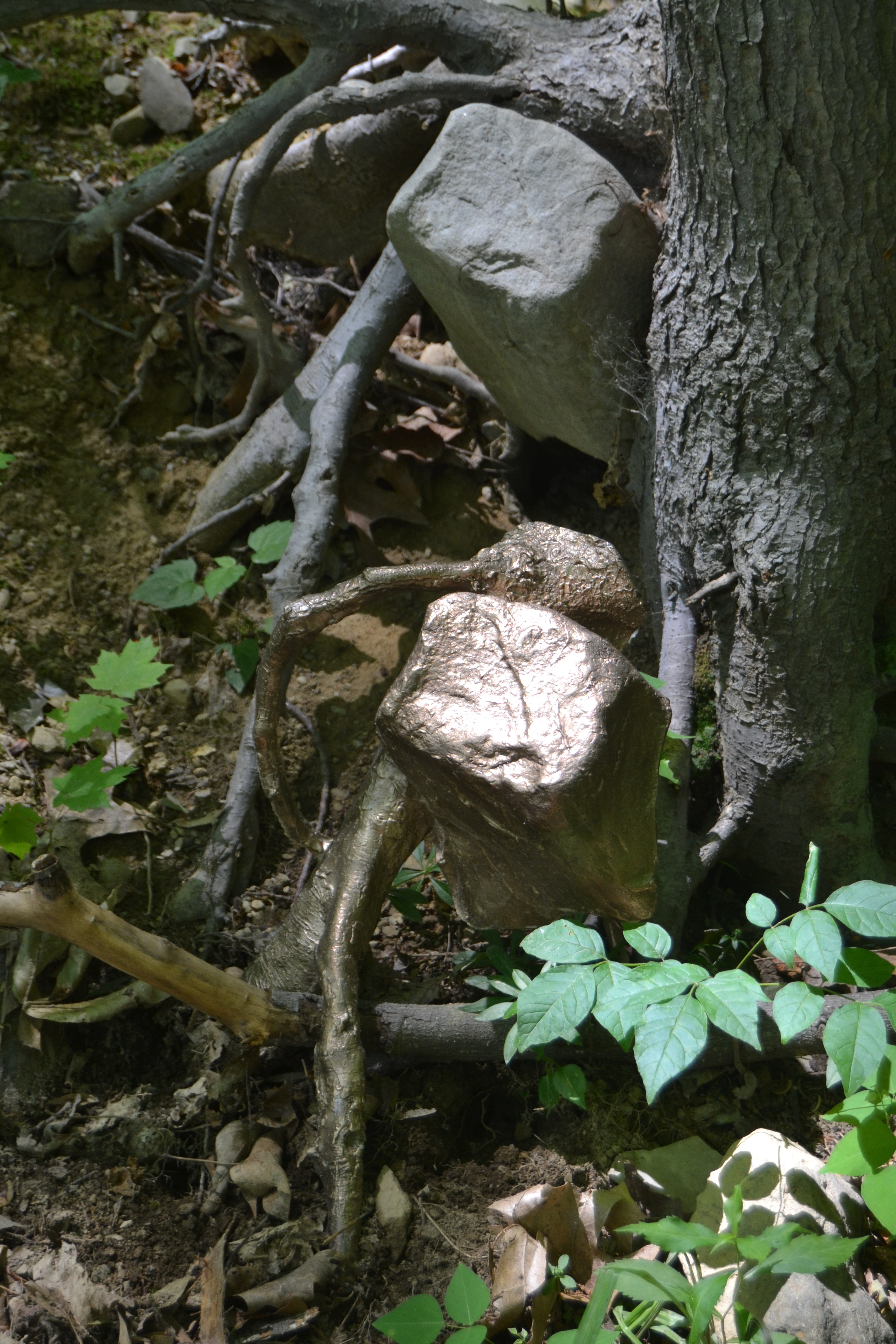 All the artists in this show embrace the science of a shifting climate change whose data-driven dynamics evolve daily. The challenge for artists and viewers alike is to grasp climate change’s accelerating pace and its uncertain consequences. The work in this show doesn’t miss its mark: it makes us ponder the impending level of crisis, upping the ante on universal awareness and acceptance.