Rising sea level is a global issue that has been exacerbated by climate change and global warming, in particular. Sea levels have varied naturally over the history of the Earth, falling during the ice ages and rising during periods of warming. With the current rising of sea levels, many coastal communities are being threated, including those on the coast of North Carolina. The coast of North Carolina is more than a set of beautiful beaches that could be permanently lost due to sea level rise. Eastern North Carolina is predominately low-lying salt marshlands, farmlands, and a chain of barrier islands. These areas are considered extremely vulnerable to the impacts of rising sea levels. Most of these impacts can be broken down into three categories: historical, economic, and environmental. First, there are numerous historic landmarks, including the Wright Brother’s Monument where the first flight occurred, lighthouses, and state parks. These landmarks are an important part of history that could be lost forever. Secondly, private homes, businesses, and other structures located on the coast could be damaged and/or destroyed. Included in other structures are public infrastructure, such as roads and sewer systems, which were costly to install. Third, natural ecosystems, wildlife habitats, and important fisheries could be altered negatively or ruined with the rising sea levels. In addition, there is potential for the contamination of drinking water as saltwater levels rise to levels higher than the water table (https://deq.nc.gov/about/divisions/coastal-management/coastal-management- hot-topics/sea-level-rise#1).

Climate Central’s report titled “North Carolina and the Surging Sea” aimed to project and quantity the impact rising sea levels and costal floods could have on North Carolina’s coast. Throughout the report, they discuss the effects of 4 feet and 8 feet increase in sea levels; however, their Surging Seas Risk Finder map presents complete results for all sea levels. A portion of this map is shown for what North Carolina’s coast could look like after a 4 feet increase in sea levels. Note that any land covered in blue is projected to be completely submerged at this level of seawater increase. 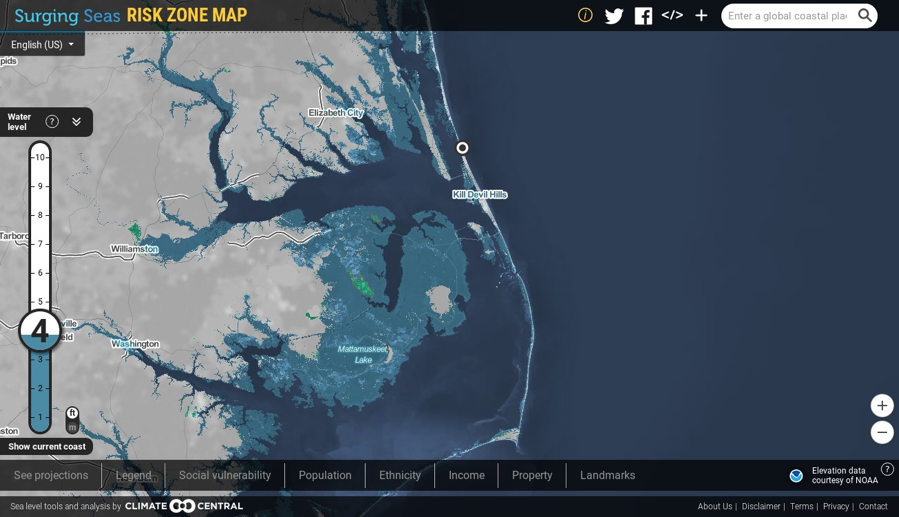 It is projected that sea levels in Duck, North Carolina could increase by 4 feet as early as 2090, but more likely by 2130. With this sea level increase, it is estimated that around 1.3 million acres of land and 61,000 homes would be submerged across North Carolina’s entire coast. This equates to $8.8 billion in property value and 82,000 affected residents. In addition, nonresidential buildings and public infrastructure are at risk as well. With a 4 foot increase in sea level, 2,541 miles of road, 15 schools, 108 houses of worship, and 2 power plants could be flooded beyond repair. Around 130 EPA-listed sites, which are known to include hazardous waste and wastewater generators, could be submerged. These sites are of particular concern because the hazardous materials could contaminate the water and spread to other areas (https://riskfinder.climatecentral.org/api/reports/state/north-carolina.us/state- report).

Combined with rising sea levels, other effects of global warming have the potential to harm the coast of North Carolina. Heavier rainfall and more powerful storms are commonly associated with increasing temperatures. Coupled with higher sea levels, the coast will become increasing vulnerable to storm surges and intensive flooding. Astrid Caldas, a senior climate scientist with the Climate and Energy program at the Union of Concerned Scientists, projects that the number of floods seen in Duck, NC will increase from a few tidal floods a year to more than 30 events by 2035, and up to 150 extensive floods by 2045. In the southern beaches of North Carolina, these numbers escalate to more than 350 annual floods by 2045 (https://www.coastalreview.org/2017/10/panelists-dangerous-inaction-rising- seas/). Events of this magnitude would not only destroy property, but could make the land inhabitable – especially the barrier islands. Barrier islands are comprised mostly of very sandy soils, and as these sands become increasingly saturated with water, it will become almost impossible to maintain structures there.