In 2012, Superstorm Sandy wrought destruction upon my hometown of Port Monmouth, New Jersey, along with many other communities on the New York-New Jersey coastline. With a storm surge of nearly 9 feet, my neighborhood was entirely inundated — to the effect that my neighbors down the street had to be rescued by boat after they failed to evacuate. In the wake of the storm, some $50 billion worth of damage was incurred: homes were unhinged from their foundations; the surviving ones remained powerless for weeks; and the familiar streets of New Jersey’s beach towns were buried under mountains of sand. Sandy’s near perpendicular landfall in New Jersey represents a rare weather event, with an estimated return period of 714 years. Given such infrequency, many news outlets were quick to link her origins to anthropogenically- induced climate change. Indeed, global warming is projected to increase the intensity (and reduce the frequency) of hurricanes, but given limitations in attribution science, climate scientists still cannot definitively ascribe Sandy to climate change. Nevertheless, New Jersey has begun to alter its topography in anticipation of new flood risks posed to the coast by climate change.

When I returned home from college my freshman year in 2015, I was surprised to find a beach that was wider than the one I had left. Termed “beach replenishment,” this was one of the flood mitigation projects undertaken by the Army Corps of Engineers (on the agenda for over a decade but stalled by lack of funds) to restore the sand lost to storm erosion and protect the New Jersey coastline from future storm surge and sea level rise, increasingly expected with climate change. This year, four more towns in Ocean County, New Jersey, began a similar project. Adding 11 million cubic yards to 14 miles of beaches, these beach replenishment efforts constitute one of the largest replenishment projects in history and have received abundant pushback from homeowners, who are challenging the Army Corps’ invocation of eminent domain over the coastline. In light of such undertakings, a debate has emerged surrounding the efficacy of beach replenishment as a climate change adaptation strategy. Though these projects, which consist of moving sand usually from offshore onto the coastline, protect against coastal property damage and can shelter shoreline habitats from salt water intrusion, some have questioned the ability of beach replenishment to provide long-term solutions to the coastal issues that climate change will exacerbate, particularly because beach replenishment does not inhibit future erosion and thus requires constant maintenance.

Moreover, the environmental impacts extend beyond the beach itself. When sediments are displaced from nearshore areas, the dredge pits have been shown to alter wave patterns and turbidity, which can ultimately expedite coastal erosion. As a result of this sediment transfer, marine ecosystems are inevitably disrupted, with varying abilities to recover. One particularly damaging period occurs during the transport of dredged sediment, when significant portions of the material may leak into unintended areas. When Rockaway Beach was undergoing beach replenishment in the 1970s, for example, it was estimated that 10% of excavated sediment never made it to the desired location. When such sediment is accidentally deposited in marine communities, it can cloud the water, inhibiting light penetration and vegetation growth, or cover sea grasses and coral reefs, putting undue weight them.

Many of the environmental concerns embodied in beach replenishment can be reduced by careful impact assessments and planning, but given the costs of these projects now and into the future, carefully considering alternatives is definitely warranted. They become all the more enticing when one remembers New Jersey’s failed beach replenishment projects, such as the $2.5 million Ocean City project in 1982 that was completely blown away a mere two months after completion. These alternatives may take the form of building hard structures, such as seawalls or revetments (which, albeit, could be even more expensive), but it may also be worth asking whether such extreme measures should be taken to delay inevitable coastal losses to erosion and sea level rise at all. 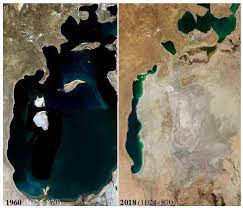 Today, I will be talking to you about droughts. It is the result from brutal heatwaves. Droughts are especially devastating in parts of California and Arizona. In the last essay, I discussed how heatwaves contribute drastically to droughts. Also, droughts happen to coincide with forest wildfires, especially in