Rooftop Choices to Cool Things Down by Paul Rivers for ClimateYou

So here’s the question: If you’re an urban apartment dweller, what are your rooftop options? How can you, as a tenant, educate yourself and figure out which kind of rooftop is the most feasible for your particular building. For example, green and white or reflective roofs are growing as technologies to replace inefficient and heat absorbing dark tar roofing in New York City. By changing the interactions between urban building materials, heat retention, air pollutants, and the lack of prevalent greenspace through innovative technologies like greenroofs, we can seek to address the UHI problem ‘from the ground up’. 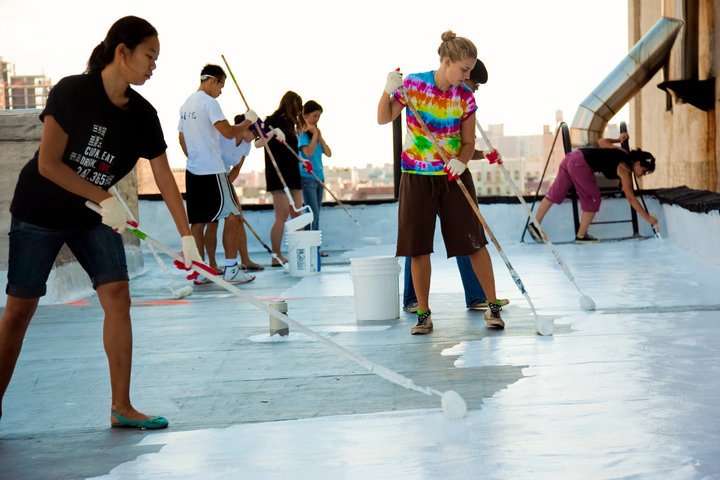 New York City suffers from a particularly acute type of UHI called ‘Nocturnal Heat Island’. Stuart R. Gaffin, Cynthia Rosenzweig, and Reza Khanbilvardi are researchers affiliated with the Center for Climate Systems Research at Columbia University, and City College’s Department of Civil Engineering & Earth and Environmental Sciences respectively.  Gaffin, Khanbilvardi & Rosenzweig found that nocturnal heat island showed temperatures between the city and rural surroundings averaging 2.5°C or 4.5°F.  Roofing infrastructure will play a large role in solving this chronic problem. Stuart Gaffin along with other researchers affiliated with Columbia’s Center for Climate Systems Research outline that: “There is growing public awareness of the role that low-reflectance (e.g., dark), impervious surfaces play in generating excess urban heat…and attention is turning to alternative systems that mitigate these effects and provide other benefits”. While much attention has indeed been spent on investigating dark roofs, researchers like Gaffin are also noticing the big effects other colored paints or retrofitted adjustments can have. Albedo represents the reflectivity of a surface. White roofs for example, like those retrofitted through the NYC ‘CoolRoofs’ program, are repainted with silver reflective paint to increase their albedo, reflecting more sunlight. Dark roofing typically has an albedo of 5%, with 95% of solar radiation being absorbed and released as heat. White or reflective roofs have a 75%-80% albedo, with only 20%-25% radiation being released as heat. It is important to notice this difference particularly as it influences the integrity of our rooftops. Black roofs experience extreme temperature swings between day and night time as they absorb and release this heat. These swings contribute to material deterioration. Researchers in their study featured in Environmental Research Letters, an environmental science journal, found that during summer, peak black roof temperature can reach 70°C (158°F). In addition, they note that the 2011 heat wave in NYC resulted in some roof temperatures exceeding 76.5°C (170°F). Clearly under these conditions black roofs are “contributing a significant heat burden onto the city’s atmosphere, buildings, and energy demand”. Green roof installations, and secondarily white or reflective roofs, can mitigate these problems due to their cooling effects. Researchers at Columbia University found that “White roof membrane temperature peaks are on average 30°F (17°C) cooler than black in summer. Green roof membrane temperature peaks are on average 60°F (33°C) cooler than black in summer”.

Evapotranspiration is a process that relies on the presence of moisture released by plants to cool the surrounding area. Because the green roof includes a living plant layer there is water content that can act as an evaporative cooling moisture source. This layer also increases the insulation of the building, which buffers heat from outside, and regulates temperature inside.

There have been several studies comparing green roofs to cool (white or reflective) roofs. Although both demonstrate high albedo benefits, greenroofs provide more material durability over time. White roofs are susceptible to environmental pressures. In Gaffin’s analysis, white roofs will lose reflectivity due to darkening and weathering, especially in sooty and polluted city areas. Roof proximity to transportation arteries is likely contributing to these pollution influences. Gaffin’s inspection of rooftop surfaces also yielded that “rainwater ponding” and runoff are significant contributors to darkening on white roofs. Finally, the dark “old” roof underneath newer reflective paint is also a factor in reflective paint wear. Despite these issues, white roofs are still a novel consideration for buildings that suffer from overheating problems. However, investing more heavily in greenroofs instead of reflective ones could help mitigate these darkening problems. Additionally, nocturnal urban heat island can be mitigated by large scale green roof infrastructure, which acts as an evaporative cooling agent through moisture in vegetative layers. Vijayarahavan in his 2016 study places the albedo of greenroofs at 0.7-0.85, which would reflect much more sunlight than a dark bitumen, tar or gravel roof which has an albedo of 0.1-0.2. Through moisture evaporation and albedo changes, greenroofs can foster significant roof and surrounding air temperature cooling. Check for the next upcoming article in this series with more information on how green roof policy can been implemented around the world, in the United States, and most recently in New York City! 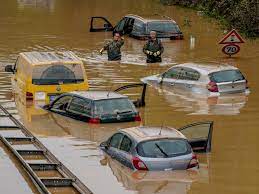 Flooding is an natural catastrophe, occurring when an excess of water submerges normally dry ground. Floods in coastal locations are often produced by heavy rainfall, quick snowmelt, or natural disasters such as an storm surge from tropical cyclones. (Blöschl, et al., 2019). Additionally, floods can be produced by excessive

The Urban Environmentalist May 7, 2022