Hurricane Irene has formed in the Caribbean, becoming the first hurricane of the 2011 Atlantic season.  The storm, located near Hispaniola as of Monday morning, is moving towards the west-northwest and may later threaten parts of the United States coastline.  Keep checking back here at ClimateYou for the latest information. GR and DB

Here’s the update on what is now Tropical Storm Irene as of Monday afternoon 8/29. Overall, damage is being estimated at $10 billion. The preparations and precautions kept to 24 the human toll of this massive though less destructive than feared storm. Flooding caused destruction from North Carolina through Vermont. Irene is gone, but won’t be forgotten soon.

Irene came ashore in North Carolina with high winds and heavy rain. The rest of the North East is bracing for the onslaught with unprecedented precautionary measures. GR

Hurricane coming? There’s an APP for that! Several, in fact. This article lists them, giving their cost and how to get them. It also provides advice on related technology and how to insure it all works for you when you need it. GR

Here’s a sober state-by-state update on the status of Hurricane Irene and official responses to it as of Friday afternoon 8/26. GR

Alert extends up the East Coast as Hurricane Irene closes in

Irene’s flooding ‘could be a hundred-year event

Irene is now a Category 3 hurricane, as of Wednesday morning 8/24. The storm’s exact track is still unknown, but the National Hurricane Center now predicts that Irene will hit coastal North Carolina on Saturday and then proceed up the East Coast. Residents should take precautions. GR

Hurricane Irene is turning into a major storm. FEMA urged all on the East Coast to take it seriously and be prepared by taking appropriate precautions. GR

Here is CNN’s report on Hurricane Irene as of Tuesday morning, 8/23. The focus is on the storm’s impact on Puerto Rico, the Dominican Republic, the Turks and Caicos, and other Caribbean islands. GR

Hurricane Irene is becoming a board-up big deal. If predictions are correct, it will become a Category 4 storm in the next day or two, and impact the Carolinas by the week-end. With expected winds up to 131 mph, it will be the first hurricane to hit the U.S. mainland in 3 years. GR

Fine art of hurricane tracking: Push is on for the 7-day forecast

Just in time for Irene, which may be the first hurricane of he season, this article tells about the efforts by NOAA to improve weather forecasting from five days to seven.  Weather happens day by day, the climate is measured over at least 30 years.  GR 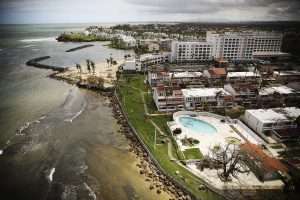 Tourism for many locations is the main source of income for the population. Over the years, millions will travel to various destinations to visit. A location may be known for its wildlife, beaches and its architecture. For example, Florida is known for their wonderful beaches and trophy fishing.